WE LOVE THE SMELL - of Songkran in the Morning We love the smell of Songkran in the morning... when all the party people are still asleep, when the water players are home preparing for the big day, when the city is quiet with the smell of holiday in the air... You know it is going to be a great day, and you feel privileged walking in the quiet streets of Chiang Mai, meeting with locals going to the market or walking to the temples.

Noted as the hottest month of the year, April in Chiang Mai has lots of joy and excitement to bring. Songkran, the Thai Traditional New Year (April 12-15th), is an exotic tradition which has been celebrated for generations. Across the country, it is time for laughter and entertainment, for religious ceremonies and merit-making, for family and friends... and of course, splashing water, lots of it! Known the world-over for its characteristic tradition of water-throwing, ranging from courteous sprinkle to harmless water pistols, Songkran is a refreshing solution to “beating the heat” during the hottest season of the year. Despite the fun of these three days of soaked and harmless battlefields (April 13-15) Songkran is not just a splashing festival: religious ceremonies and rituals are celebrated at major temples in the city.

After celebrating Songkran the traditional way, don’t miss the great fun of water splashing in the streets of Chiang Mai. The city is actually home to one of the country’s biggest Songkran celebrations; it is small enough to remain manageable but still has a huge moat for all of the water fun and the spiritual side too. Lasting a bit longer than the traditional three days, this festival kicks off with an eye-catching procession around the city.

Playful screams and laughter replace the usual sound of the traffic and moped engines, children throw themselves into the moat and adults revert back to adolescents. Famous locations to go are Nawarat Bridge, Thapae Gate and around the moat; to party in cleaner water, head-up to Central Festival or Maya Department Stores.

Whether with a silver bowl or a scoop of water, this amazing festival is unique. It will last for three days but don’t forget that the day will be over only when the sun touches the horizon and that there is no safe place to hide so, get ready, and have fun!

In addition to the fun of the water splashing, Songkran festival in Chiang Mai is also a culturally fascinating holiday season with unique traditions and beliefs. Songkran festival actually has a deep meaning and that is to ask for blessing and to enrich religious intentions. As everyone wishes for good vibes, house wives clean their houses. On the other hand, young individuals are showing their respect to elders by pouring fragrant water on their palms.
There are various activities to be preserved and promoted during the

Songkran festival, which are :
- gently bathing of Buddha images at home and in monasteries with water mixed with a Thai fragrance: this water is meant as a symbol of washing all of the bad away.
- wearing of new clothes to pay respect to the elders,
- cleaning of living spaces, nearby compounds in the community and Buddhist monasteries as places for merit making.
- offering food to monks in the morning, or cooking food for monks to give merit to ancestors.
- offering robes to monks and novices
- going to temples and bathing Buddha images with divine water, scented with jasmine flowers.
- making merit by setting free fish and birds, listening to sermons and practicing the five precepts.
- pouring water onto the elders’ hands by using clean water or jasmine scented water.

SONGKRAN’S MUST SEE:
- the making of sands stupas in temples: sand is brought to the monastery compounds and sand stupas are made in the form of stupas or animals, decorated with colorful flags, incense and flowers to worship the Lord Buddha. Later, the sand is used for construction purposes and other public works.
- witnessing the local tradition of Mai Kham Bho in temples (especially at Wat Jed Yod). The Mai Kham Bho Procession is centered on the Bho tree, a sacred tree that can be found in temples. Bho trees are surrounded by wooden supports called Mai Kham Bo and these supports are placed around the trees in temples. Local beliefs say that the act of placing support around sacred trees brings luck and prosperity to devotees. Mai Kam Bho processions usually fall on the same day of April as Songkran.
- attending the Phra Buddha Sihing Procession on April 15th on Thapae Gate and the parade to the Mayor’s House on the same day.
- joining the Lanna shows on Thapae Gate, from April 13th to 15th (11am to 10pm) featuring Lanna cultural show, local wisdom, cultural and art performance and local cuisine.
- Witnessing “Lanna Giant Drums Festival”, to be held on the 14th of April, 6 pm., at Phra Singh Temple. The highlighted performance will be a show of fifteen drum teams from all over Northern Thailand. Klong Sabat Chai is a famous drum art, part of the northern culture. Performed as an integral part of the drumming, it is hung from double wooden sticks and carried by men. It can only be carried by strong Thai men and its beating requires agility and virtuosity as it includes the use of many body parts such as shoulders, elbows, legs and heads.

SONGKRAN - Three Days of Fun and Water Battles:
Although the roots of this festival are spiritual, with water dousing representing a purification ritual to wash away evil spirits in anticipation of the Thai New Year, it is also an enormous countrywide water fight and Chiang Mai has a reputation for being the most fun city of the country! Water balloons, super soakers and virtually any sort of spray bottle become weapons of water during Songkran Festival. So join in one of the biggest parties of the year!

By definition, Songkran Water Festival is a 3-day holiday, celebrated each year from April 13th to 15th. This date was set firmly around 1940, as the traditional Thai New Year and the pinnacle of Songkran. Before that the date varied according to a lunar calendar. It’s something of an anachronism to consider this date “the new year” because Thailand recognizes the Gregorian calendar and the year beginning on January 1st, but Songkran is still celebrated vigorously as a national holiday. This year the Thai government has allowed a 5-day national holiday, from April 12th to 16th.

Songkran Festival in the ‘Land of Smiles” is one of the top-five festivals in the world. It is definitely an event not to be missed. In Chiang Mai, the biggest parties can be
found at Thapae Gate on the eastern side of the city, around the moat and at major department stores such as Maya and Central Festival (this is probably where you
will also find the cleanest water). There, there will be several stages set up and also open-air food market. In town, even though the road will still be open to traffic around the moat, it is usually blocked with ravers and revellers. Surprisingly, if you would like to take a break from the water and the games, the old city of Chiang Mai (inside the moat) is a much quieter area, with less water players and lots of cafes to take a rest and enjoy the quiet life.

You have come to the right place: whether it would be tradition or fun games, Chiang Mai has it all! 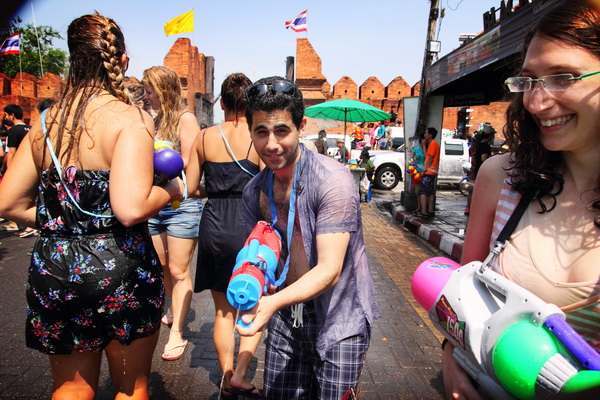 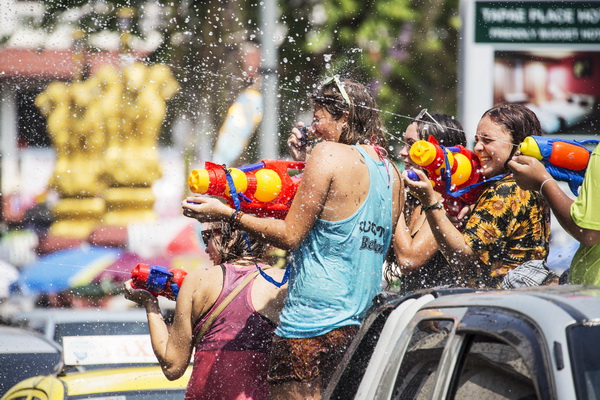 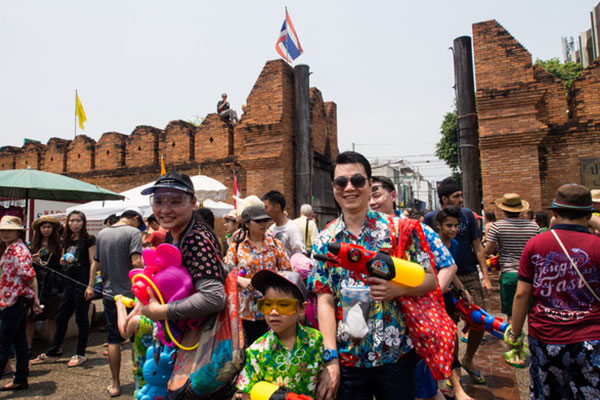 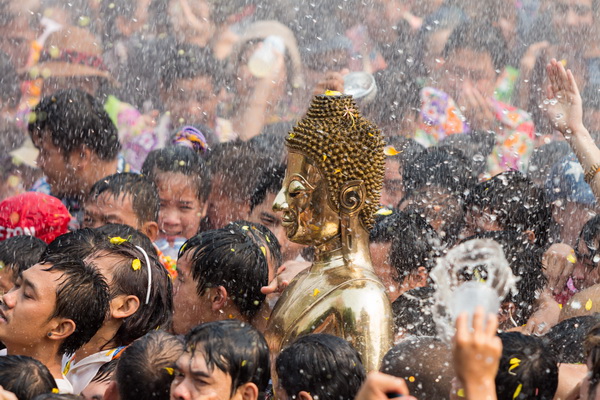 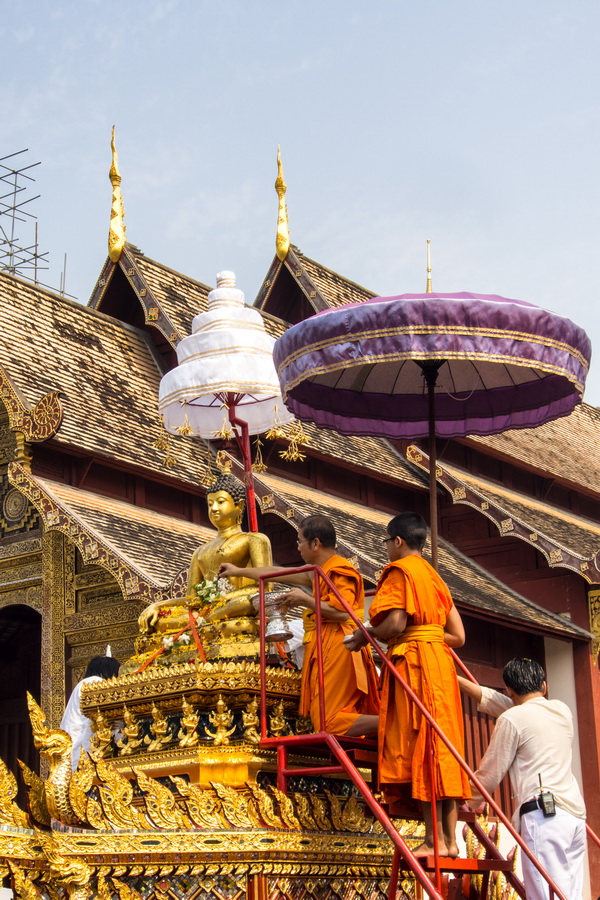