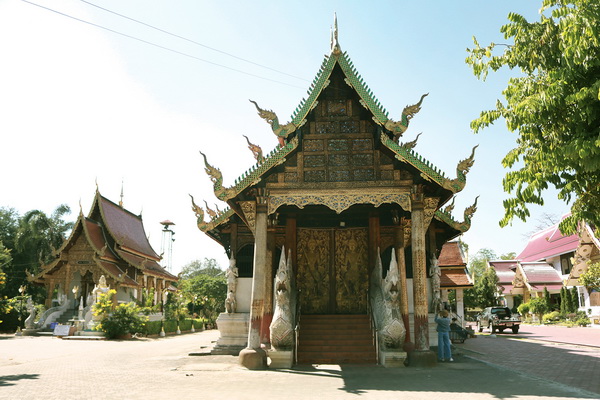 The most striking aspect of Thailand’s architectural heritage is its frequently magnificent Buddhist temples. In Thailand, temples or wats, play a vital role in every community. A typical Thai temple has two enclosing walls that separate it from the secular world. The monks’quarters are situated between the outer and inner walls. In larger temples, the inner walls may be lined with Buddha images and serve as cloisters for meditation. This part of the temple is called buddhavasa or phutthawat.

Inside the inner walls is the bot or ubosot (ordination hall), surrounded by eight stone tablets and set on consecrated ground. This is the most sacred part of the temple -ordinations and special ceremonies are held here - only monks can enter. The bot contains a Buddha image, but it is the viharn (sermon hall) that contains the principal Buddha images. Also in the inner courtyard are the bellshaped chedi or stupa (relic towers), which contain the relics of the Buddha.

In Lanna (North Thailand) as in other parts of Thailand, temple murals primarily served an educational rather than a decorative purpose. Usually painted by anonymous artists, they depicted scenes from the life of the Buddha, the moralistic Jataka tales, and other religious stories, so that they could serve as an inspiration to people who came to the monastery.

In the North, murals can usually be found in the viharn (as opposed as the ubosot in the central region) since that is the main assembly hall in a Lanna temple and is thus most accessible to the public at whom the paintings are principally directed. Another difference is due to the practice of hiring artists from neighbouring regions such as Burmese, Tai Yai, Lao, and central Thais. Outside style thus appeared blended with local ones, and there are many scenes of northern daily life intermingled with the more conventional subjects.

In the old times, all Thai murals, Lanna as well as others, used traditional techniques that almost guaranteed a relatively short life. The plastered surfaces of the brick walls were washed to remove any salt and then given a series of primary coats, the final one of which was “sealed” with a number of pale washes. This became the background for the murals, which were painted in tempera pigments on a dry wall; those in Europe were applied to a wet wall, allowing deeper penetration. In the humid climate, such methods led to early deterioration and explain why murals more than a few hundred years old are rare .

Yet, in Chiang Mai, you still can see some old temple mural paintings. Whether set in the luxuriant greenery of a remote village, or confined by the rapid commercial development of the city, these temples or more properly, monastery compounds - are expressions in ornately embellished wood and stone of the vitality of the Buddhist faith in Thailand. In this cover story of Chang Puak Magazine, we present you four famous and beautiful temples: a bird’s eye view over their architecture and their different mural painting styles.

It is perhaps the second most venerated temple in Chiang Mai after Wat Phra That Doi Suthep. Located inside the old city walls, at the western end of Ratchadamnoen Road, the temple’s signature Lanna-style roofs and glittering viharn (assembly hall) invite visitors. The walledin temple compound is busy with visitors and worshippers all year round. It houses three main structures, the main attraction being the elegantly decorated Lai Kam assembly hall and its restored murals.

Phra Singh Temple’s Viharn Lai Kham (assembly hall) is decorated with murals depicting two different stories: “Sang Thong” on the north wall and “Suwannahong” (or Hong Hern) on the south wall. The murals of Viharn Lai Kham was influenced by the Rattanakosin art from central Thailand as seen from the technique and the realistic concept famous in the Western art. The painting also illustrates the Burmese artistic influence - as we can see from the image of Pya-that. Moreover, the costumes and appearance of royal characters in the mural reflect the culture from Bangkok during the reign of King Rama V such as wearing “Raj-pattern” dress (Royal Uniform), growing mustache and having Mahatthai haircut for a man, wearing Johng Grabehn loincloth as well as breast cloth and growing short hairstyles for women. Phra Singh temple’s mural paintings are believed to be the most refined and sophisticated examples of Lanna murals to be found in Chiang Mai.

The construction of this temple started in 1345, and the mural paintings date back to the end of 18th century. Wat Phra Singh : Ratchadamnoen Road. Chiang Mai.

Located right opposite Phra Singh temple is Wat Prasart. This temple was probably founded towards the end of the 16th century. It is an attractive temple complex housing an ubost (ordination hall), a viharn (prayer hall) and two chedis (pagodas). The ubosot, viharn and one chedi are constructed in a straight line. The stairs leading to the entrance of the viharn contain large Nagas (mythological snakes) guarding the building. A unique feature of this temple is the short tunnel that connects the viharn to the chedi behind it.

Parts of the viharns walls are decorated with murals from the early 19th century. Mural paintings at Prasat temple are very different from Phra Singh temple; they are made with red and gold colors only, using the Laai Kham goldleaf technique. Laai Kham goldleaf paintings were often used by Lanna artists to depict auspicious symbols such as stupas, celestial beings, lotus flowers and Bodhi trees. Wat Prasart : 4/2 Inthawarorot Road. Sriphoom. Chiang Mai.

Located about six kilometers east of city center (very close to the Mandarin Hotel), Wat Buak Khrok Luang was constructed in the early to mid 19th century and was renovated
during the rule of Chao Kaew Nawarat, the ninth prince of Chiang Mai (1911-1939).

The highlights of this temple are definitely its 19th century mural paintings that cover most of the internal wall surfaces. The paintings comprise 14 panels (7 bays on each side) and were likely painted by the same artist, as they are all similar in style. The subject of the paintings are the previous lives of the Buddha (the Jakata tales) as well as scenes from the Buddha’s historical lifetime. Generally, the paintings on the North and Southwest sides depict the Jataka tales, whereas those on the South and Southeast sides depict the life of Buddha.

At one point -possibly in 1925-, new windows were added to the temple, resulting in the removal of part of paintings to make may for the larger openings. Some of the other paintings were damaged due to natural processes, but this temple remains a beautiful example of Lanna art mural paintings.

When you visit Bua Khrok Luang Temple, you may find it very quiet. Somedays the entry door to the ubosot is closed to prevent from the birds to fly inside. You may get in through the side door. 0 Wat Bua Khrok Luang : Thasala. Chiang Mai.

Wat Umong:
Located a two or three kilometers West of Chiang Mai city and South of the University of Chiang Mai, Wat Umong is a temple set in a natural setting at the foot of Doi Suthep mountain. If you think that all temples look the same, then you have to visit Wat Umong, and walk in its peaceful and natural gardens.

Wat Umong was constructed over 700 years ago and still retains its rural ambience. It gets its name from the tunnels under the Stupa. Umong in Thai is tunnel. The tunnels are covered with beautiful murals that date back to the year 1380 and were renovated a few years ago. These murals represent trees, flowers and birds painted in red and gold colors. When the temple was constructed, there used to be much more mural paintings; but in 1930, after being deserted for many years, Jao Chun Sirorot and a group of friends started restoring the temple. They had to deal with 80cm to 100cm layers of sand in the tunnels, with some parts that could not even be accessible. While removing the sand, unfortunately, some lower parts of paintings disappeared with the sand because nobody suspected there were paintings.

The monks at the temple feed the animals that wander in the surrounding forest. Visitors are allowed to feed the turtles and fish in the small lake within the temple complex and fish food is available at the gates. Signs with wise sayings in Thai and English are hung along the path leading to the lake. There is a little island in the middle called Pigeon Island. Wat Umong : 135 moo10 T. Suthep. Chiang Mai. 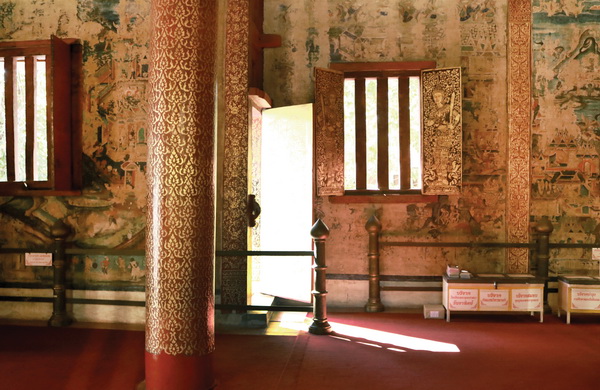 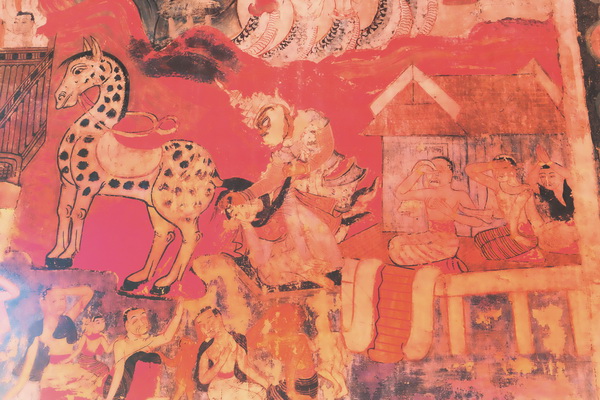 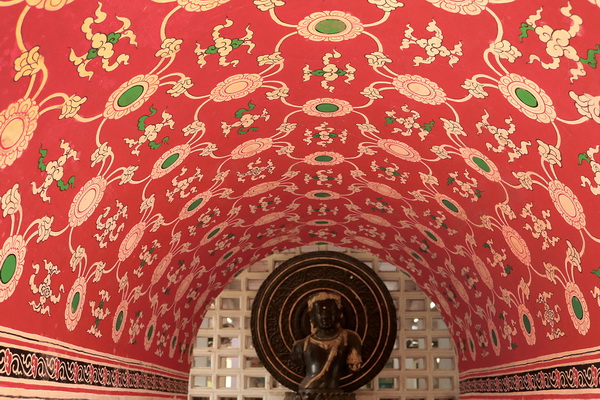 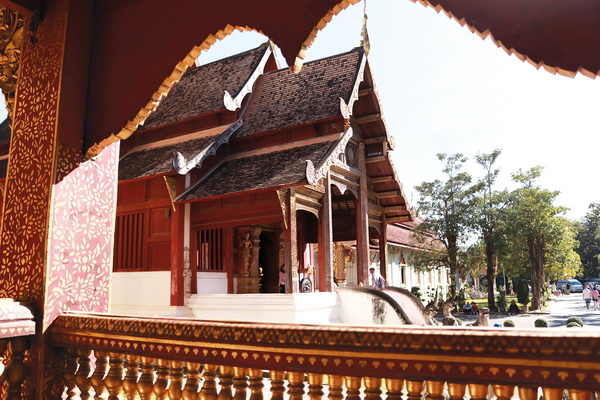 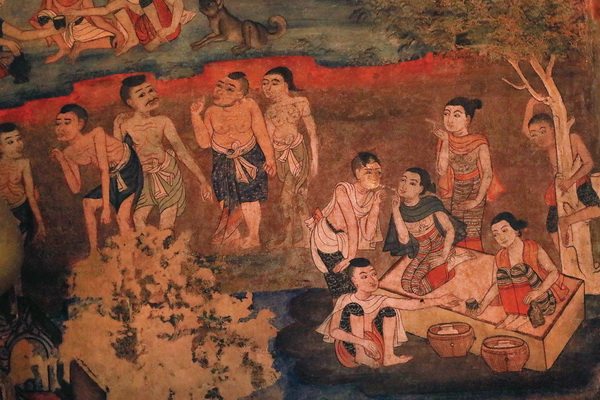 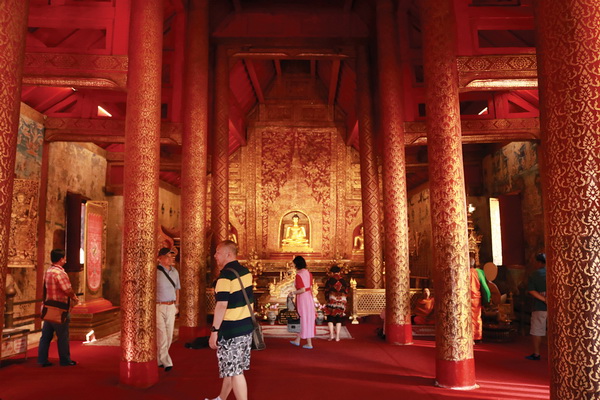 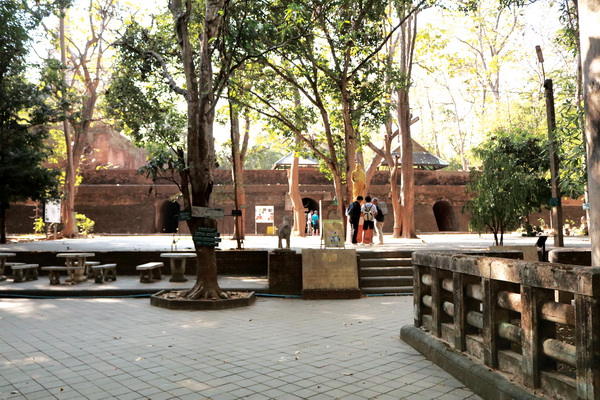 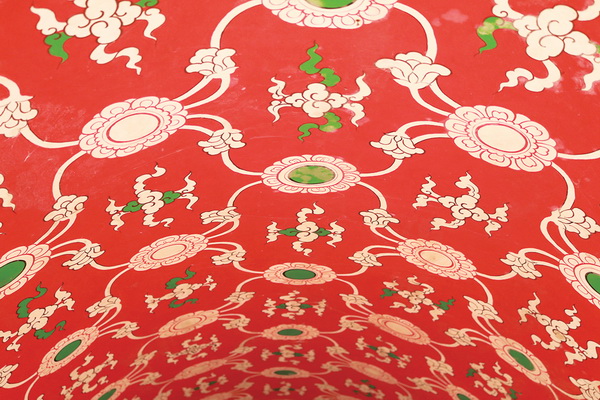 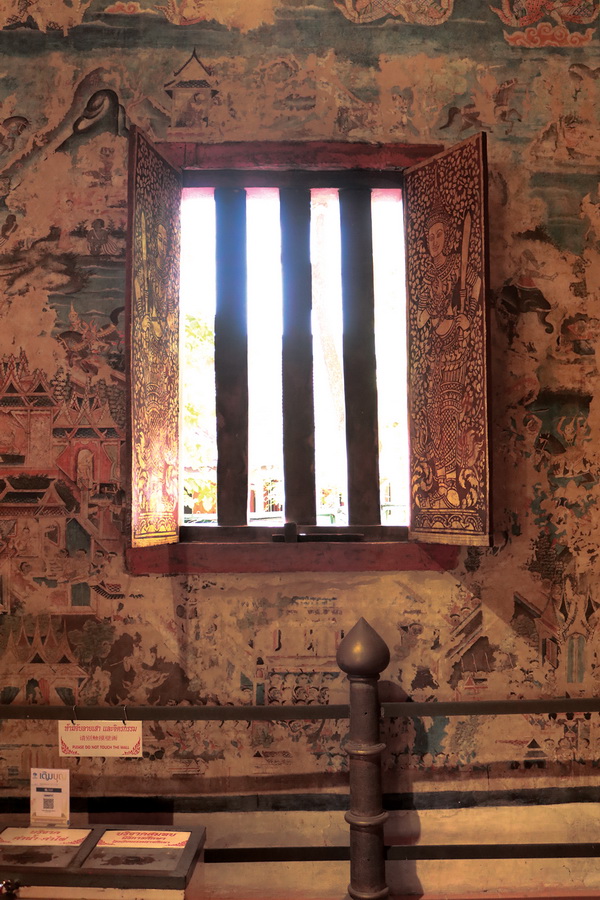 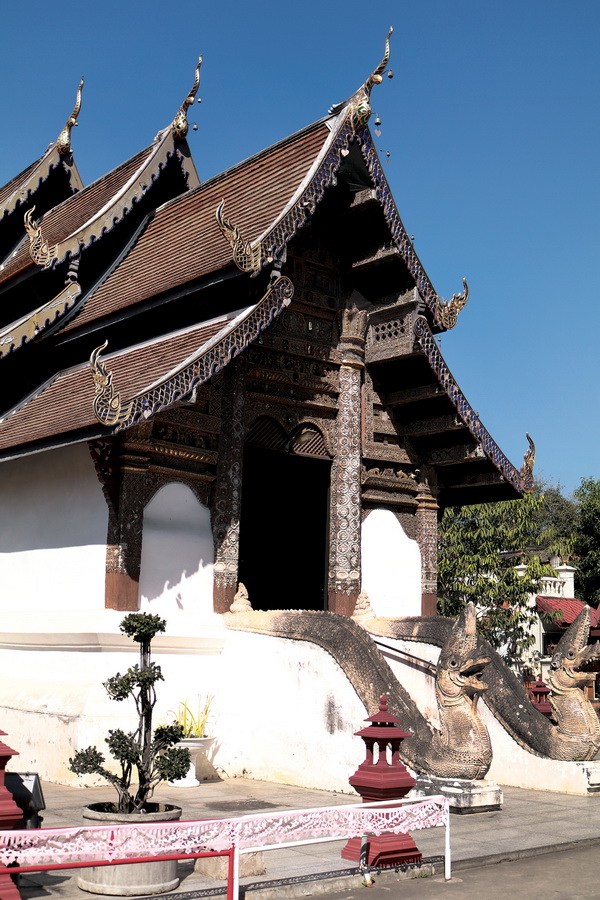 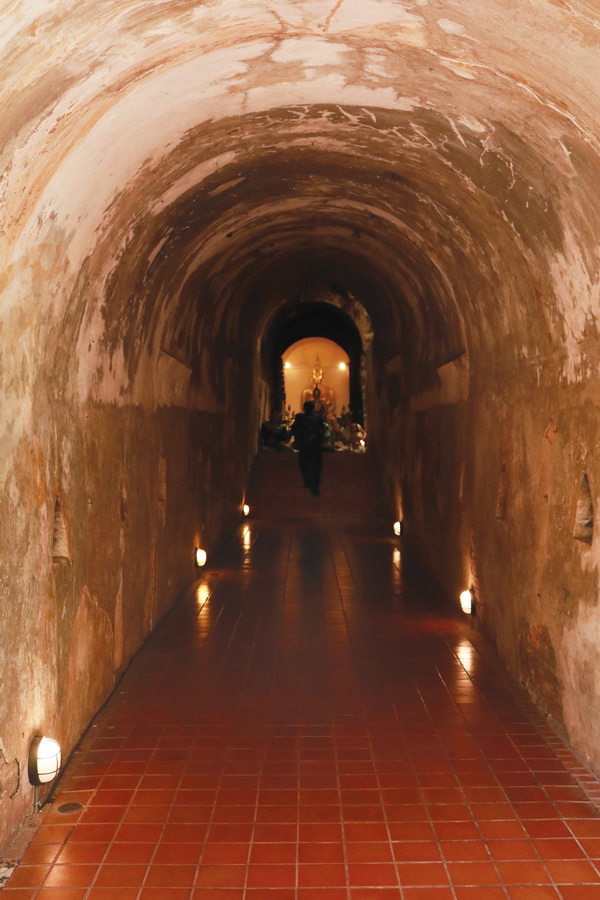