CITY TOUR CHIANG RAI - Visit the City and around Being among the oldest towns of Thailand, the city of Chiang Rai was founded in 1262 by King Mengrai (who also built Chiang Mai in 1296) and was the first capital of Lanna Thai Kingdom. It was occupied by Myanmar from 1558 until 1774, when it became part of Siam once again. Located at the northern tip of Thailand, bordering Myanmar on the North, and Laos on the East, Chiang Rai is only a one hour and half drive from sister city Chiang Mai. It is a wonderful place to visit on a two days-one night basic, or more.

"The quieter neighbor of Chiang Mai, Chiang Rai is a land of outstanding natural beauty, where visitors looking to avoid the hordes can visit remote hilltribes, spot exotic wildlife and check out the Golden Triangle. It is also the birth place of the Royal Project and home to beautiful palaces and authentic Lanna architecture temples."

Here are some of the main attractions not to be missed : Also known as The White Temple, this place is regarded as one of the most beautiful temples built in this century. A masterpiece of artist Chalermchai Kositpipat, famed for his extravagant and unique Buddhism-related paintings, Wat Rong Khun reflects the artist’s grand visions of heaven, hell and Nirvana. The main assembly hall and adjacent area are carved in white with glass mosaics. The construction started in 1997, look closely and you’ll see pictures of international heroes like Spiderman, Sailor Moon and even Ben10 hidden in the murals. When it’s completed (it could take 50 years), the temple will have nine buildings. Donations are welcome but should not exceed B10,000 as Chalermchai doesn’t want to be under the influence of big donors, even though he’s spent more than THB 40 million of his own cash. @ Pa Or Donchai, Chiang Rai. Tel. 053-673-579. Started 35 years ago, Baan Dum Museum (aka The Black House) belongs to the family of national artist Thawan Dachanee, famous for his eerie sculptures made from horns and bones, reptile skins, traditional African sculptures, old boats, Lanna-style woodcrafts. These art installations are black colour and housed across 32 buildings, most of which are Lanna-style pavilions made from black wood. @ 414 Moo 13, Nang Lae. Chiang Rai. Tel. 053-705 834. After years of Japanese-style pottery training with pottery master Nakazato Tarouemon, artist Somluk Pantibun returned home to set up his own studio in the middle of a forest in 1991. Doy Din Daeng Pottery features interesting ceramics in natural colors and asymmetrical shapes. All products are handmade so prices can be from a few hundred Baht for a dish to thousands for large-size ceramics.
@ 49 Moo 6, Nanglae. Chiang Rai. Tel. 053-705-291. 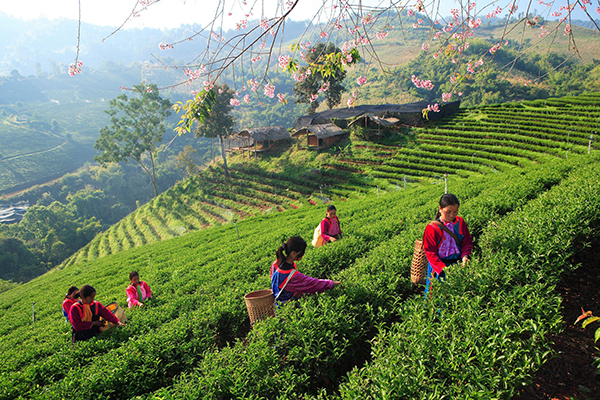 Doi Mae Salong, also known as Santi Khiri, is a hilltop village that was colonised in the 1940s by refugee soldiers who came from Burma but were originally part of the Chinese 93rd Division that fought against Mao Zedong. Even now, there is a decidedly Chinese feel with teashops and slopes planted with oolong, coffee and fruit trees. For a taste of China without crossing any international borders...Where to stay: Mae Salong Flower Hills Hotel, Chiang Rai. www.maesalongflowerhills.com 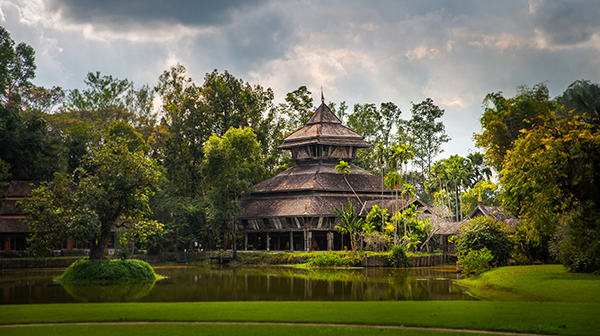 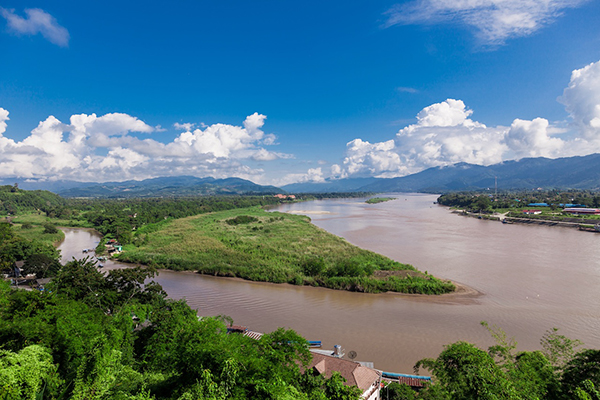 Lush jungle, mist-shrouded mountains, hill-tribe villages and tranquil views of rice paddies mark the Golden Triangle, the point in northern Thailand that converges with Laos and Burma where the Ruak and mighty Mekong rivers join. The peaceful and untouched city of Chiang Saen, set on the banks of the Mekong in another 14th century Lanna capital, dotted by temples, historic buildings and ruins. Six miles upstream is the heart of the Golden Triangle, the confluence of the Mekong and Ruak rivers, known locally as Sop Ruak – the point where all three countries can be seen from one vantage point. Trips on the river are some of the most famous attraction in the area.