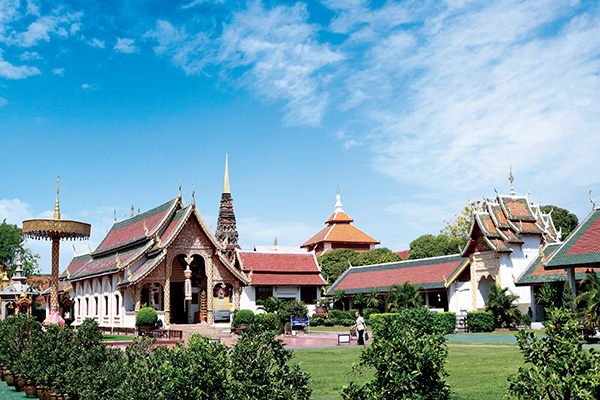 As this April issue of Chang Puak Magazine is taking us to Baan Don Luang in Lamphun city, in search of weaving looms, our editorial team though it would be a good idea to explore a
bit more of the region and visit Lamphun’s most famous and splendid temple - Wat Phra That Haripunchai.

Situated in the heart of the town, Wat Phra That Haripunchai dates back from the 11th century but it’s central stupa is thought to originate in the 9th century. Its earliest origins were in 897 when the then king of Haripunchai is said to have built a stupa to house a hair of the Buddha. The present compound, was founded by king Athitayaraj, on what is believed to have been the site of Queen Chamadevi’s royal palace.

One of the most noteworthy landmarks of this temple is the 46-meter tall golden Chedi or Buddhist stupa. In addition to an impressive Ratannakosin-style viharn, built in 1925 and housing the revered Phra Chao Thongtip Buddha image, the temple complex also includes the unusual steppedpyramid Suwanna Chedi, dating from 1467.

This is one of very few surviving examples of Mon architecture in Thailand. Nearby hangs a giant bronze gong, claimed to be the largest in the world. Other architectural works include the temple’s ancient-style brick arch, which is adorned with fine designs, and the pair of sculptured lions at the door.

After visiting this temple, you might want to take a city round-trip by open-air electric cart (100 THB). The cart shows you other important temples and historical sites around the city. Tickets are on sale at the temple’s parking, operating twice a day at 9am and 1pm, except on Mondays (try to reserve on arrival as it can be sometime fully booked).

By any standards, Wat Phra That Haripunchai is a remarkable structure that history and culture buffs should not miss.

Note: behind the back door of the temple, after crossing the street, you will meet with Haripunchai National Museum. This place presents the history of Lamphun with over 3,000 ancient items, from amulets to carvings, ustensils and even stone tablets.