DOI SUTHEP TEMPLE - 5 Things You Did Not Know 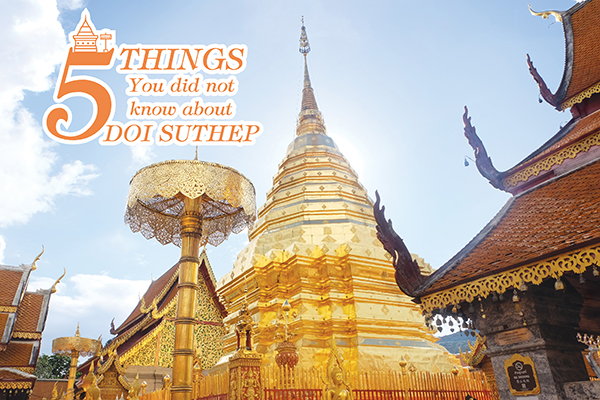 The magnificent temple of Doi Suthep is well renowned all around Thailand, and Northern people have a say “You haven’t come to Chiang Mai yet, if you have not visit Suthep Temple”. Most of us know about the story of beautiful Doi Suthep Temple, may it be from guidebooks, from the different boards in the temple, or thanks to friendly tour guides. However, there are a few facts that most visitors don’t know about. Here are the Top 5 Things you probably did not know about Suthep Temple:

1) The Bells & Gongs : There is a total of 119 gongs and bells in the temple (not counting the little ones which were brought by visitors). The big gong, which is located down the Naga stairs and next the big Buddha statues, may even be one of the world’s largest gong.

According to traditional beliefs, the sound of bell ringing can purify the holy place so the bells have become sacred objects in Buddhist temples. Many Buddhist chants begin with the sound of the bell; however, the Buddhist faithful may also ring bells when entering a temple or answering the call to worship when a monk sounds the bell. The bell symbolizes wisdom and compassion, which Buddhist practitioners recognize as being the path to Enlightenment.

2) The Buddha Statues : The interiors at Doi Suthep temple contain many Buddha statues that come in all different styles and materials. More than 233 Buddha statues can be counted within the inside courtyard. Statues of the Lord Buddha are surrounded, standing, reclining, and seated beneath snakes; he stares out serenely offering peace to the many Thai worshippers who come to pay respects at the holy site. At Doi Suthep temple, the most important Buddha image is the 2 meters high golden Buddha statue which is located in the main viharn (sermon hall).

3) The staircase : With it’s Naga (water serpent) architecture and its 315 steps from the main road to the temple ground, the staircase is one of the major symbols of Doi Suthep temple. It is also the longest Naga staircase in Thailand. Most publications about the temple indicate 306 steps, but there must have been some construction since then as we counted twice 315 staircases, from the street to the top of the stairs. Nagas are sacred water serpents which bring good luck as well as bridging the earth and sky. Each of the

Naga on the staircase side has seven heads and was ordered to be built by Bonz Mahayan Mongkolpoti, they have been renovated many time since then. It is believed that the climb to the top of the staircases help devotees accrue Buddhist merit. Nowadays, visitors usually reach up the hilltop via the funicular (20 THB) and walk down the stairs.

4) The Best Time to Visit : visit sunrise or sunset to be sure to avoid the crowd and enjoy an unforgettable experience.

At sunrise: it’s that moment of the day when monks start praying and the tourists are still asleep. It is the perfect time to explore the temple, take some marvellous pictures and watch the city wake up from the top of the mountain. Monks chant everyday from 5.30 am to 6.15, and you are welcome to join in the chanting; the funicular opens at 6am (sometime 6.30am). Then at 7am, there is the ceremony of merit making by people from the surrounding villages who have come up to the temple. After that, some monks will walk down the Naga stairway and receive morning alms from the villagers. In addition to this magic moment, the second reward for
waking up so early is that the coffee shop in the temple’s compound opens from 7am... imagine having your morning coffee with this one-million-dollar view!

Sunset at Doi Suthep Temple is another unforgettable experience. Due to the location and the mountain, it is not possible to see the sunset from there. But spending the sunset in the temple is a very magic moment. The lights are awesome, and so is the atmosphere. Most tourists are gone and the funicular will not be working after 6pm. So, when the sun sets it is mostly for people who want to attend the evening chanting in the temple and enjoy a special moment and atmosphere. However, the drive down from the mountain in the dark should not be underestimated!.

5) What about the Monk’s Trail? : most of the tourists don’t know about this trail, but it is quite popular among expats. The monk’s trail is a 2.5 to 6 hour activity depending on how far you want to go and if you want to hike down as well. The entire hike up is in the forest and parts of it pass some nice waterfalls. Even if you are a good hiker, you should not go alone, and you should always make sure you have a mobile phone with you in case of accident, as well as mosquito repellent. Also, never go during the rainy season, it can be very dangerous because of the flash floods.

The first section of the trail takes you to the beautiful Pha Lat Temple in about one hour in each direction; The second section is more strenuous, going up more steeply from Pha Lat Temple to Doi Suthep Temple. This section takes about 2 to 2.5 hours and is a bit more difficult. The starting point of the trail is tricky to find, located behind Chiang Mai University, on the way to Tawanron Restaurant. There are no English sign at all, so it would be best to check for details and pictures provided in blogs of Monk’s Trail lovers (the entrance is at coordinates 18.798111, 98.942361).

Overlooking the city from its mountain throne, Doi Suthep temple is one of the most sacred temples in the region. This beautiful example of northern Thai architecture is situated at 1,000 meters above sea level and so, it offers an impressive view of Chiang Mai city.

For those who don’t recall the story of this temple, here are a few headlines. The monastery was established in 1383 by King Kuena of the Lanna kingdom. The relics were said to be fragments of bone from the Buddha’s shoulder and were believed to have mystical powers. The king placed the relics on the back of a white elephant which was then released into the forest. The elephant climbed the mountain at Doi Suthep and, before collapsing and dying of fatigue, the sacred animal marked the spot where the relics should be enshrined by turning around three times and trumpeting three times. Although the original chedi was built by King Kuena during the 14th Century, the present complex dates from the 16th Century and has been restored and extended at various stages over the years.

How to get to Doi Suthep temple: Doi Suthep temple is located about 20 minutes from Chiang Mai University. You can either go by car or by bike (route 1004 northwest), by song thaews (red taxi), or reserve a tour through your hotel’s tour agency. A cheaper alternative is to make your way along Huay Kaew road to the entrance of Chiang Mai Zoo and from there, join a song thaew which will ferry you to the temple for only 30THB (one way), but the red taxi won’t leave until it has a minimum of six or more people. Admission is 50THB, which includes a two-way ticket with the funicular. Remember that Doi Suthep is a sacred place and you should dress respectfully when visiting (no shorts, no skirts and no tank tops).

From there, you can take another song thaew and continue to Phuping Palace (40THB), the Hmong hilltribe village (60THB) and the top of Doi Pui National Park (200THB).

Wat Phra That Doi Suthep is truly a sacred destination that must be discover. This beautiful place is a heaven of serenity and a jewel of Lanna (northern Thai) architecture. 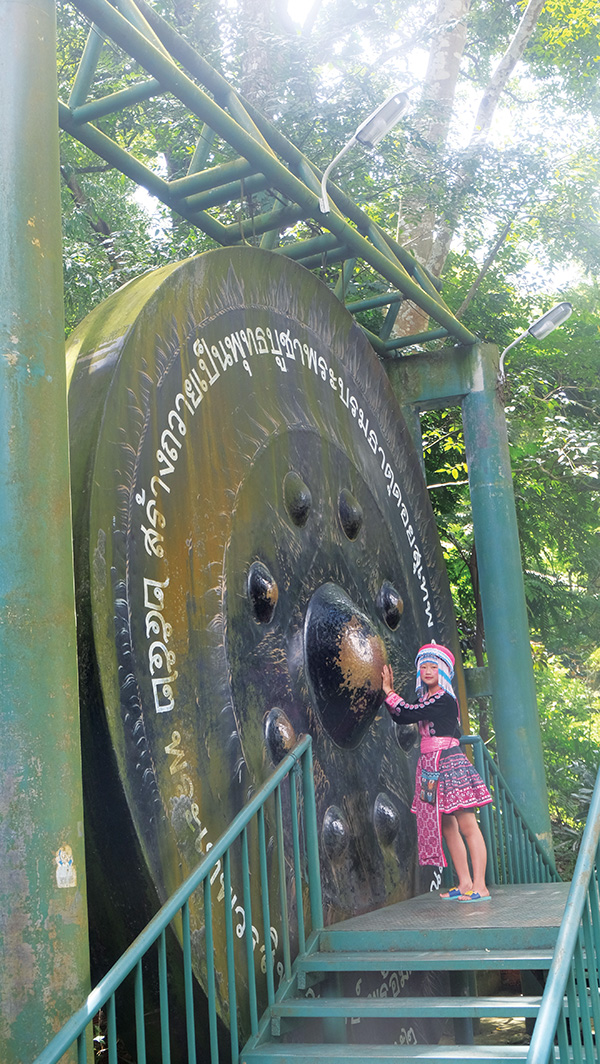 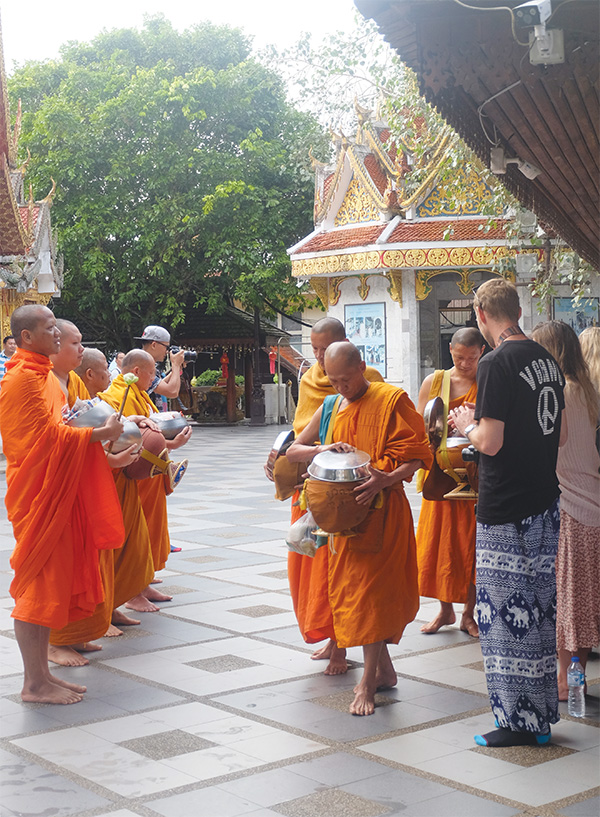