LOY KRATHONG - The Festival of Lights 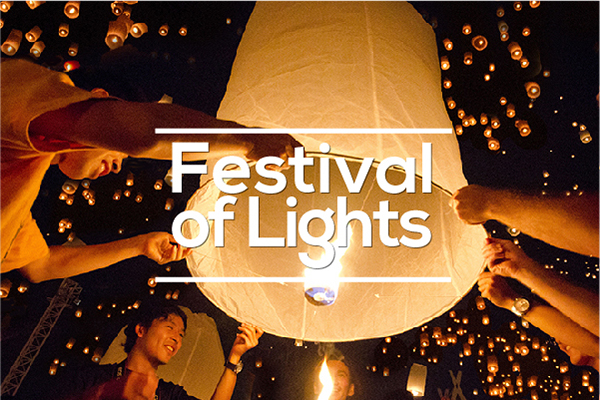 This year, Loy Krathong festival, will take place at the beginning of November (2-5 November, 2017), that is why we added this little reminder a bit ahead of the festival. Wherever you happen to be in the kingdom, Loy Krathong is definitly a spectacle to behold, and Chiang Mai remains one of the most magical cities to enjoy this event.
For centuries, the colour and beauty of Loy Krathong has survived across Thailand. The floats containing incense, flowers, a coin and a candle are set adrift on any body of water across the kingdom. Tradition-laden, the celebration comes at the end of the rainy season to honour the goddess of water.

Loy means “to float” in Thai. Those giving thanks to the goddess, light the candle, make a wish and launch their krathong, believing it will carry away sins and bad luck. Originally, the krathong for this full moon festival were made from intricately olded banana leaves; now you can also find some made of bread, which will feed the fishes. If you happen to find beautiful floats made of foam, please do not buy them; let’s be good to our earth and mother-water!

As with most celebrations in Thailand, Loy Krathong comes with a rich history. The most common legend revolves around Nang Nopamas, an artistic woman in the royal
court of Sukhothai some 700 years ago. Her wisdom and knowledge, as well as her creativity, charmed King Ramkhamhaeng, whose reign lasted for approximately 20 years until 1298. History has it that “Khun Nopamas presented to His Majesty The King an ornate float made of green leafy deck on which she placed a little cargo of betel-nut, betel leaf, parched rice and sweet-scented flowers. She took several fresh fruits of a fleshy character, such as papaya and pumkin and deftly carved them into representation of fruits, flowers and animals, then piled them up in a conical arrangement in the center.”

Khun Nopamas, who could do miracles with her hands, enjoyed making and floating krathongs as an homage to Buddha and she was chosen by the king as creating the best floats. The same king decreed that a Buddhist holiday on the night of the full moon be declared, with the floating of the krathong a staple of the event.

Loy Krathong is celebrated across Thailand at a time when the water levels are the highest after the rainy season. It is one of the most scenic local festivals to celebrate in Chiang Mai. The city offers double the festival fun as Loy Krathong blends into the local Yee Peng revelry which, involves a ritual of launching hot-air balloons into the sky. This year the ritual takes place from November 2 to 4 and is allowed at night time, from 10pm to midnight at Nawarat Bridge. The sight of hundreds of fluorescent, jellyfish-like lamps gracefully floating overhead creates a magical atmosphere. Illuminated waterways, buildings, trees and gardens throughout the city makes historic Chiang Mai a real crowd-puller during the festivals. Loy Krathong in Chiang Mai is also the festival of beautiful parades. On the nights of 4th November, giant illuminated Krathongs are paraded with candidates for the upcoming beauty contest perched on top. These parades go from Phra Singh temple to the Governor’s House next to Nawarat Bridge, passing through Thapae Gate (starting time around 6pm).

The focus of celebrations in Chiang Mai is around Nawarat Bridge which, connects Thapae Road on the western side of the river with Chareon Muang Road on the other side. If you like crowds and a party atmosphere, this is the place to be. A more sedate and spiritual venue can be found at the temple Wat Chai Mongkol (see city map H5), which is south of the bridge along Chareonprathet road. The temple has its own concrete landing on the river, where devotees can launch their krathongs.

Romantic sights, lights on the river and flying lanterns, Loy Krathong is a time for hapiness together and wishes of love and sucess. 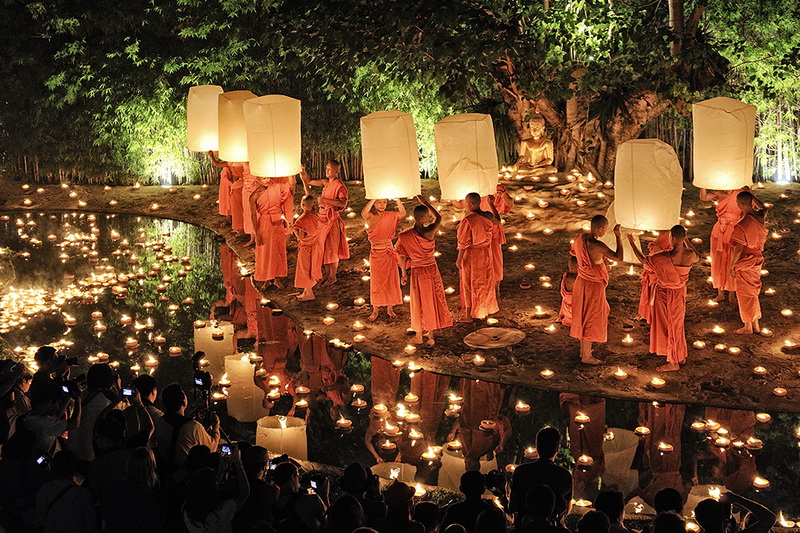 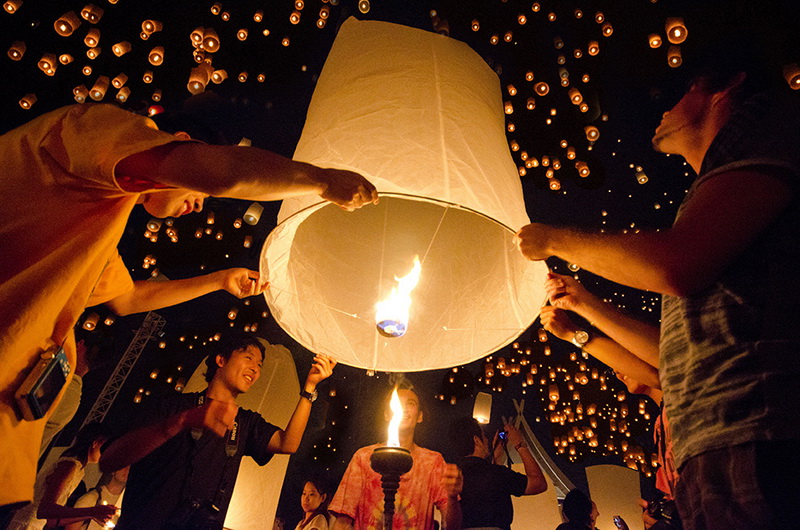 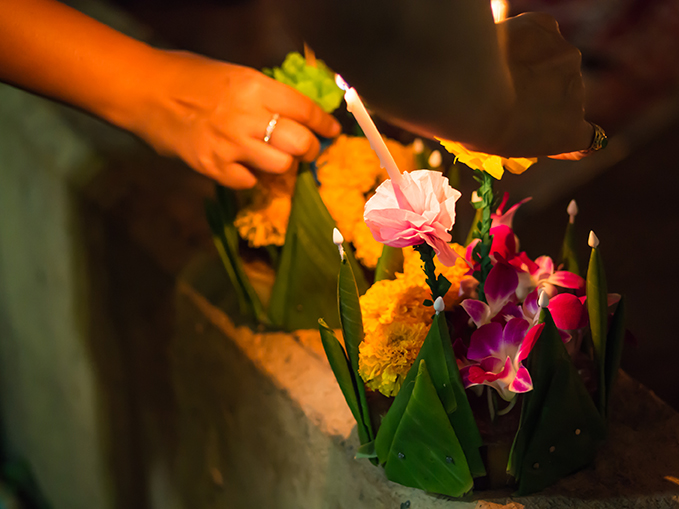 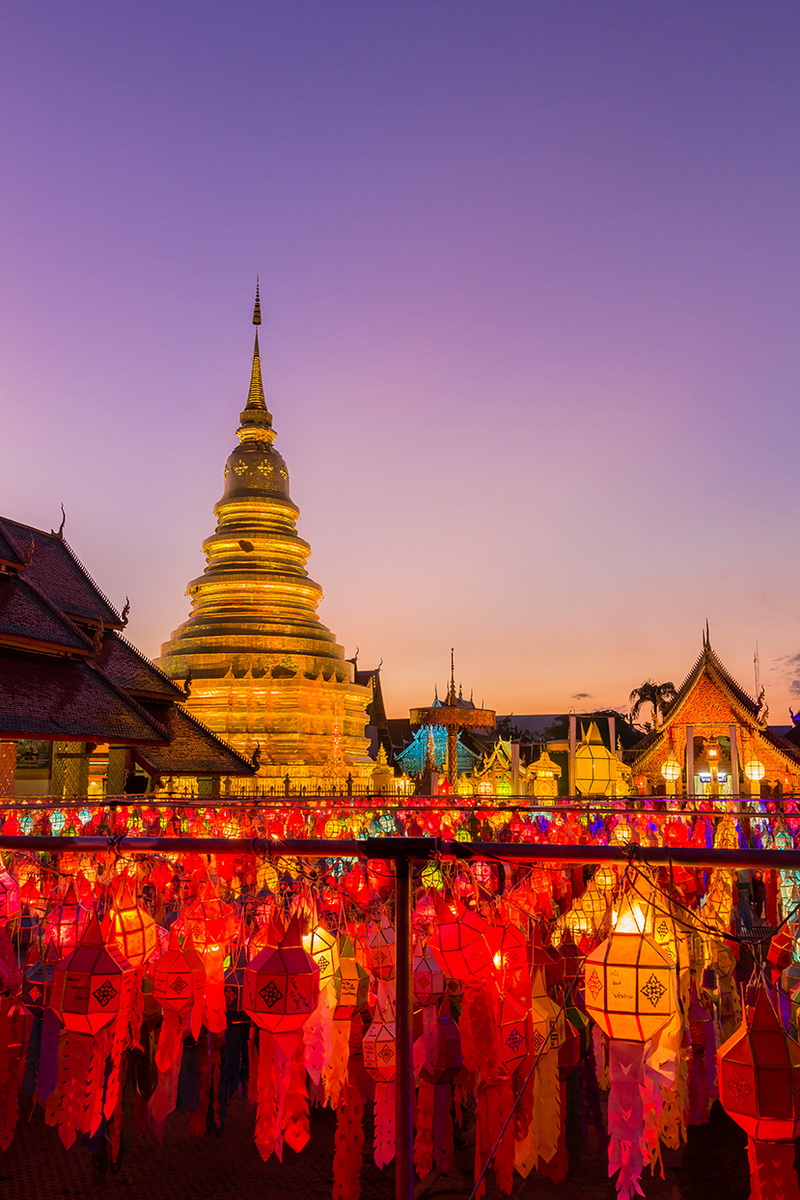