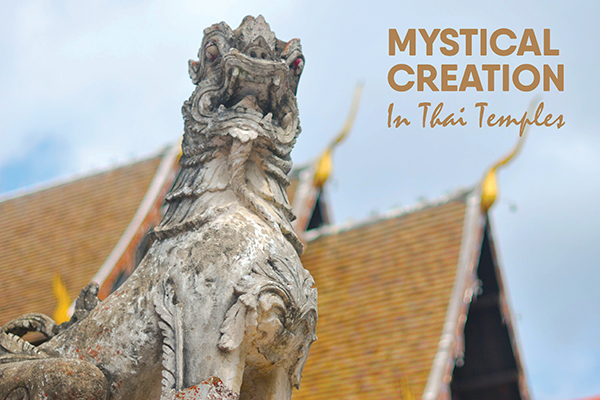 Thailand’s mythical creatures shape a world of wonder with their presence in the intricate decors and sculptures of Thai temples. Have you ever wondered who is the tiger looking after temple’s doors? Why stairways are decorated with serpent? Or what the half-man-half-beast creature is about?

These beings are said to reside in the Himaphan Forest on the slopes of the mythical Mount Meru, which is considered to be the centre of the Buddhist and Hindu cosmos. The forest, and the creatures that dwell there, are described in the sacred Thai Buddhist text which derived from the ancient Hindu text the Ramayana. There are dozens of these mythical creatures that reside in the forest and some of the most commonly depicted in Thai art are the mythical snakes, lions and the swans.

In this issue of Chang Puak Magazine, we look over the meaning behind the most famous of these mystical creatures and their role in Thai culture.

1) Singha - Guardian Lions (สิงห์)
Guardian lions are among the oldest and most common temple custodians. They are referred to as Singh or Singha. They usually come in pairs and can be seen standing at the entrance of Thai temples, large buildings and even houses. This mythical creature in the form of a lion has been a part of Thai history and culture for as long as anyone can remember. In most traditions, the lion is regarded as King of the Jungle. Figuratively, it is the symbol of Power, Strength, Courage, Leadership, Dignity, Loyalty, Perseverance and Endurance. In ancient times, Singha traditionally guarded imperial Chinese palaces and other important buildings. Representation of Singha owe a lot to their Chinese cousins. In popular Chinese culture, two lions are placed in front of a
building to guard its entry. They are thought to have mystical powers to repel evil spirits - the female on the left side with her Singh 辛哈 (Wat Pha Lat, Chiang Mai) cub and the male lion on the right with a ball under his paw.

2) Naga (พญานาค)
Naga is a semi-divine serpent which is associated with water and is often seen as a temple guardian, usually snaking its way down the staircase. As a being of the water and the underworld, Naga are fearsome creatures that can be found in both Buddhist and Hindu faiths. They are often used as a decoration on large boards, windows, doors, gates and arches. Legend says that Naga can also transform into a human being. In addition to this, Naga can control the rain and thus affect the prosperity of local communities. They also guard the hidden wealth of the earth and are a protector of Buddhism.

Aside from their stone incarnations in temples, local people in North East Thailand believe that the Nagas actually live in the Mekong river, breathing fireballs that can be seen rising from its uninhabited areas. This leads to an amazing festival (Bang Fai Phaya Nak Festival) every mid-October in Nong Khai province.

3) Khochasi (คชสีห์)
The Khochasi is a composite of a lion with an elephant’s trunk, ears and tusks. It guards sacred places, and in particular, portals in the North of Thailand.

4) Garuda (ครุฑ)
The Garuda is the national emblem of Thailand. It is a mythical bird-man hybrid often depicted on government buildings, logos as well as on banknotes. Garuda is the fearsome king of the birds and the natural enemy of Naga. It has a human body, but with the wings, legs and beak of a bird. It also transports Vishnu, the Hindu God.

5) Kinnari (กินรี)
The mythical hybrid creature Kinnari (female) or Kinnara (male), whose top half is a celestial human-like dancer and bottom half a celestial swan (Hong) are two of Thailand’s most beloved mythological creatures. The female Kinnari symbolises feminine beauty, grace and cultural accomplishment in singing and dancing.

Kinnari has become an important part of Thai artistic tradition. In most Buddhist temples and royal palaces in Thailand, the golden figures of Kinnari are a popular portrait to decorate monastery areas. Its story has also inspired a classical Southern Thai dance, called the Manorah Dance.

In the Adi parva of the Mahabharata, (The Book of the Beginning) Kinnara and Kinnari say:

- “We are everlasting lovers and beloved. We never separate. We are eternally husband and wife; never do we become mother and father. No offspring are seen in our lap. We are lovers and beloved ever-embracing. In between us we do not permit any third creature demanding affection. Our life is a life of perpetual pleasure.”

6) Yak (ยักษ์)
Yak, or Yakshas, can be seen in Thai temples (especially in and around Bangkok) as well as in the departure hall of Bangkok’s Suvarnabhumi Airport. Whilst they may look intimidating with their large teeth and piercing eyes, they are said to be benevolent creatures who strive to ensure that goodness prevails over evil. Yak have served as guardians to temples in Thailand since the 14th century; their role is repel malevolent spirits and strike fear into anyone who seeks to do harm.

7) Erawan (ช้างเอราวัณ)
Known as “the Elephant of the Clouds” the three headed elephant Erawan is also the incarnation of the Hindu God Indra. 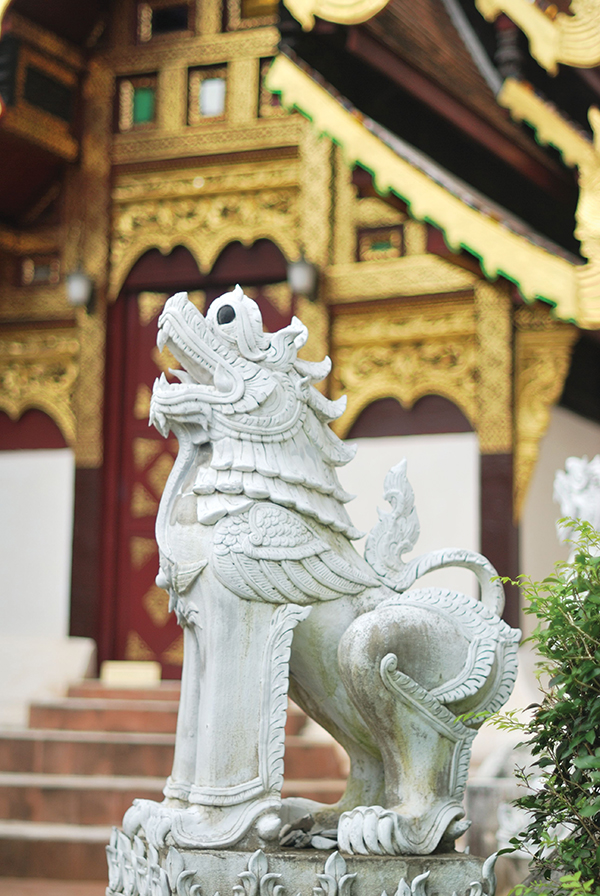 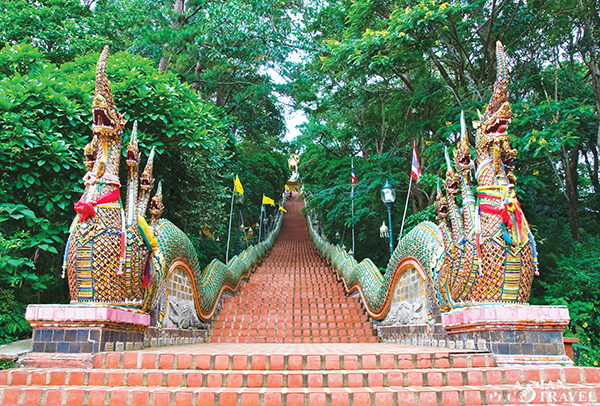 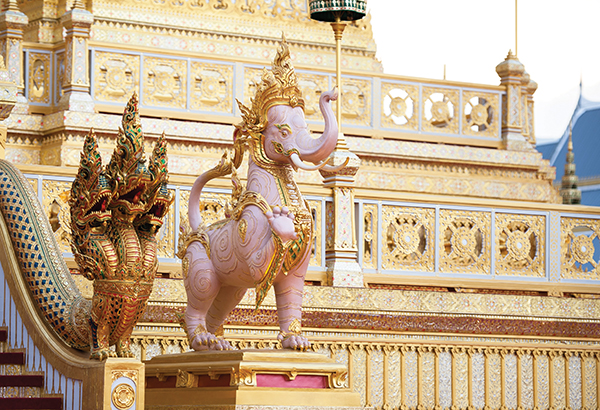 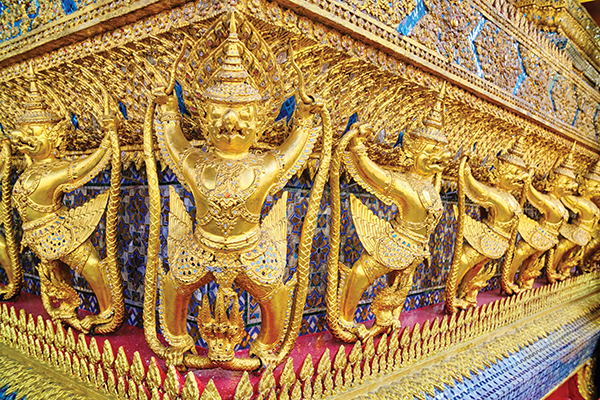 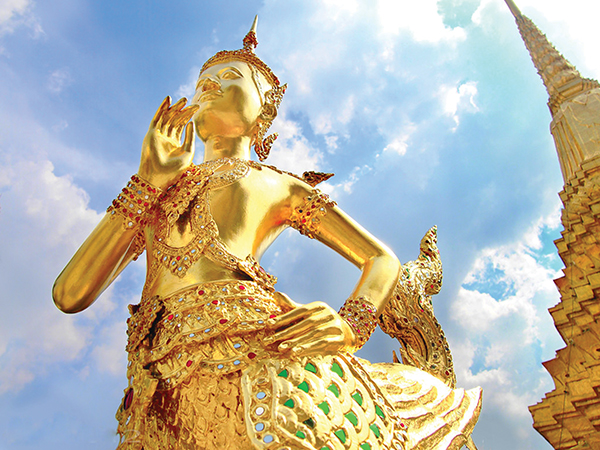