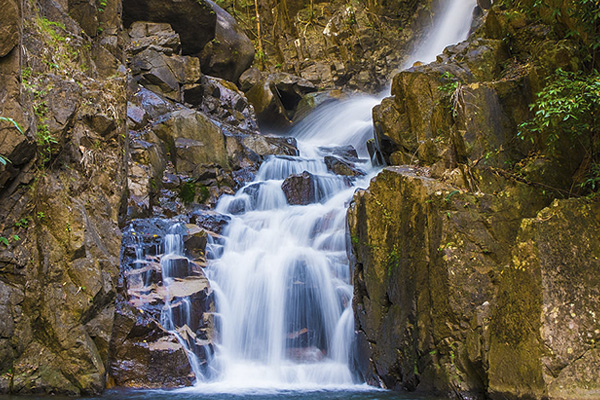 There is a place in Thailand where people can walk around waterfalls and see teeming sclods of fish converging in picturesque streams. This place is quiet, relaxing and located down in south Thailand; it is call Phlio Waterfall.

Phlio Waterfall is located in the National Park of the same name, some 15 kilometres from Chanthaburi city. This famous waterfall cascades straight out the side of Khao Sabap mountain
into a pool below where fish frolic. The waterfall is most impressive during rainy season when the falls are so powerful that mist fills the air as far away as an observation area 100 metres away.

This waterfall is beautiful but actually the carp in it are one of the main attractions. Hundreds of huge black carp swim in the clear and natural pool at the foot of the waterfall. You can buy large bags of string beans to feed the fish at the entrance of the national park and it is possible to walk safely in the pool with the fishes.

The fish are called the Soro Brook Carp (Neolissochilus soroides), and are a freshwater species in the carp family of Cypriniformes, native to the Mekong River bassin in Thailand. Long with a flattened side, a high dorsal fin and a small pectoral fin, its body is brown-green in color and 15 to 20 centimeters long. This fish likes to stay in schools of 10-20 gather over rocks in clear pools of forest streams and slow flowing rivers.

Phlio National Park park is also famous among Thai people for its bell shaped chedi near the falls, which was built by King Rama V as a loving memorial to Phra Nang Chao Sunanthakumarirat, his first consort, who died in a boat accident. A rather challenging trail leads uphill from near the stupa and rings to the top of the falls.

The Park spans some 135 square kilometres in total, mostly inaccessible and comprised of granite protrusions from the surrounding plains. The rainforest has been extensively logged over the years but what’s left along with the regrowth still holds some interesting wildlife, mainly birds including the Siamese fireback, silver pheasant, chestnut-headed partridge and the blue-rumped pitta.

Chanthaburi city is situated on the gulf coast in eastern Thailand, on the way to Kho Samet and Kho Chang archipelago. Bursting with history and a distinct mix of cultures, this small eastern Thai city is among the country’s most precious and undervisited gems. With its beautiful beaches stretching into the horizon, hidden inlets and peninsulas, charming fishing villages and beautiful attractions, Chanthaburi’s coastline is a worthy adventure for those seeking to sidestep Thailand’s more touristy beaches.

HOW TO GET THERE :
Namtok Phlio is located off Sukhumvit Road to the south- east of Chanthaburi. The easiest way to reach the park is to rent your own motorbike or hire a pick-up truck taxi in Chanthaburi, which will cost about 400 baht roundtrip.