ORCHID - The Flower of Elegance 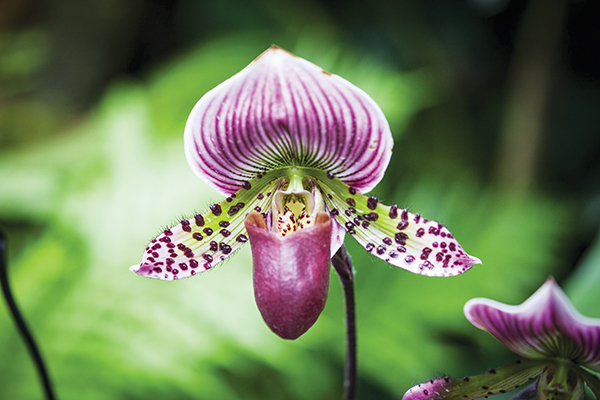 Such beautiful orchids! They have so many different meanings: a symbol of love, a statement of luxury, and sometimes indicative of strength. There are about 30,000 species of orchids and hybrid varieties in the world. And in Thailand, there are more than 1,000 different species. Indeed, Thailand has the most orchids of any country in Southeast Asia and it is one of the world’s leading exporters of these plants. While you will spot some types of orchid growing in the wild, fans of the floral beauty should schedule a trip to the Queen Sirikit Botanic Gardens or one of the many orchid farms to truly appreciate the vast diversity of colours and sizes. This February, orchid lovers will also be delighted to discover hundreds of species during the Chiang Mai Floral Festival (February 7-9, see details page 42). Some of the more common orchid types in Thailand include brassavola, denobrium, cymbidium, mokara, and vanda. In the wild, orchids typically bloom in January and August, although they are commonly used in floral decorations in Thailand throughout the year.

THE HISTORY OF THE ORCHID:
One hundred and twenty million years ago, when dinosaurs roamed the earth, a magnificent flowering plant came into being -the orchid. Evolution led to the demise of many plants and animals, but the orchid flourished, thriving on every continent save ntarctica. For millions of years, the orchid family has thrived and expanded, and it has always been a symbolic flower. For example to the early Greeks, the orchid represented virility, while the Chinese called it “the plant of the king’s fragrance.” During the Middle Ages, the orchid was considered an aphrodisiac and was used in love potions. Serious orchid collecting began in the 18th century, but because of their rarity at the time, only a few botanists and wealthy amateurs could enjoy them. In 1818, William Cattley became the first person to bloom an orchid, an event that changed the flower world forever.

Aside from being a great holiday destination, ChiangMai is a wonderful place to see masses of orchids in a host of displays. Because of its unique climatic and growing conditions, the city has proven to produce orchids which are more beautiful and stronger than all others.

In the wild, orchids drape themselves from tree branches and let their roots dangle so they may draw moisture from the air. They are not parasites feeding off the tree as some people may think. Also, they are full of little surprises for example, some medicines are derived from orchids and the pollen can be an ingredient of expensive face creams. The flavoring, vanilla, also comes from the beautiful orchid.

In Thailand, there are some 1,000 species which range from the quite rare to relatively common. White blooms are among the rarest because of their scarcity in the wild. When we see a spectacular spray of white blossoms, it is thanks to the painstaking research and work of the orchid horticulturist.

Classic, exotic, stunning, gorgeous… these words well describe the unparalleled variety of exotic orchids to discover in Chiang Mai. And for all we know there is always the possibility that unknown species still await discovery. A common sight in mangroves and wetlands, this flower belongs to the largest group of orchids. It rhizomes creep on tree roots and branches, producing clusters of golden spiky petals. 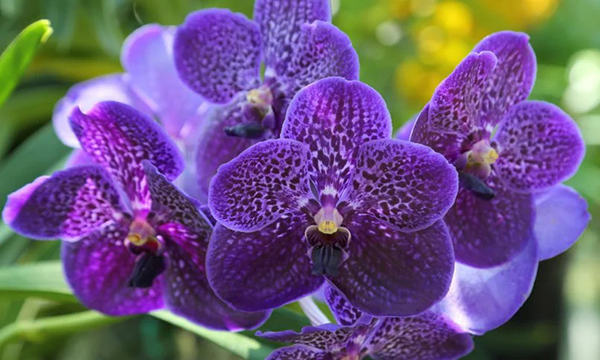 This spectacular blue orchid native to Thailand belongs to the Vanda family. It grows at high altitudes between 3,300 feet and 4,600 feet, and can be found in the mountains around Chiang Mai. 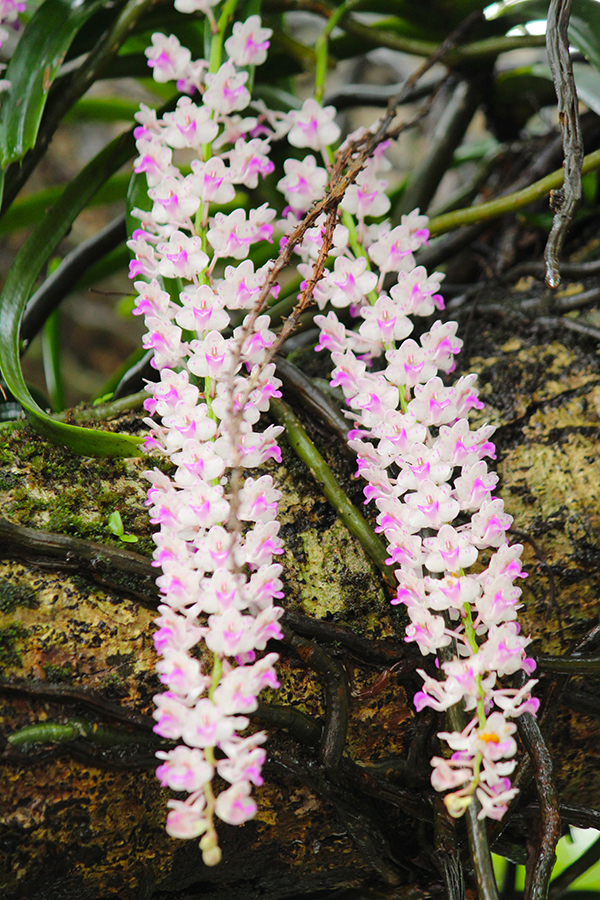 Rhynchostylis (also called Foxtail Orchid) is an exotic blooming orchid, belonging to the Vanda alliance. This orchid has a bunch consisting of more than 100 pink-spotted flowers. 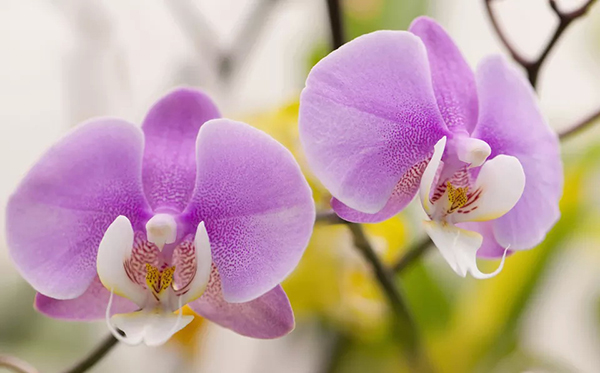 Most people are introduced to orchids through phalaenopsis orchids. These are the thick-leaved plants with elegant, arching sprays of blooms that can be seen in so many design magazines. 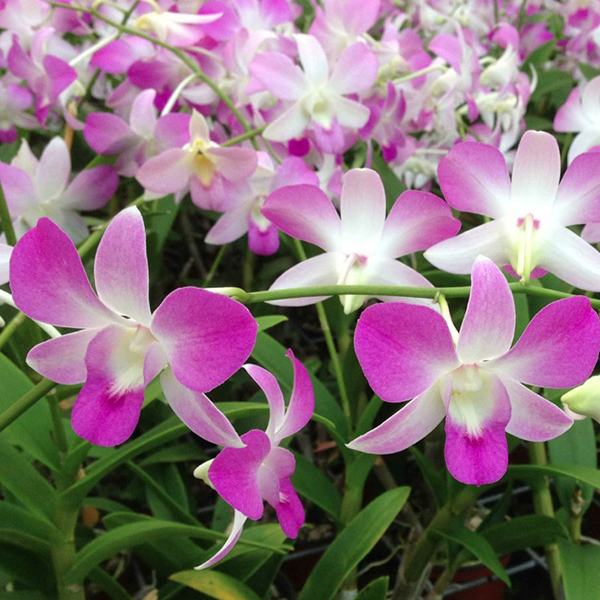 Native to Southeast Asia, the genus Dendrobium is one of the largest of all orchid groups. There are about 1,200 individual species, and they can grow in all manner of climates, from hot, wet lowlands to high-altitude, colder mountains. 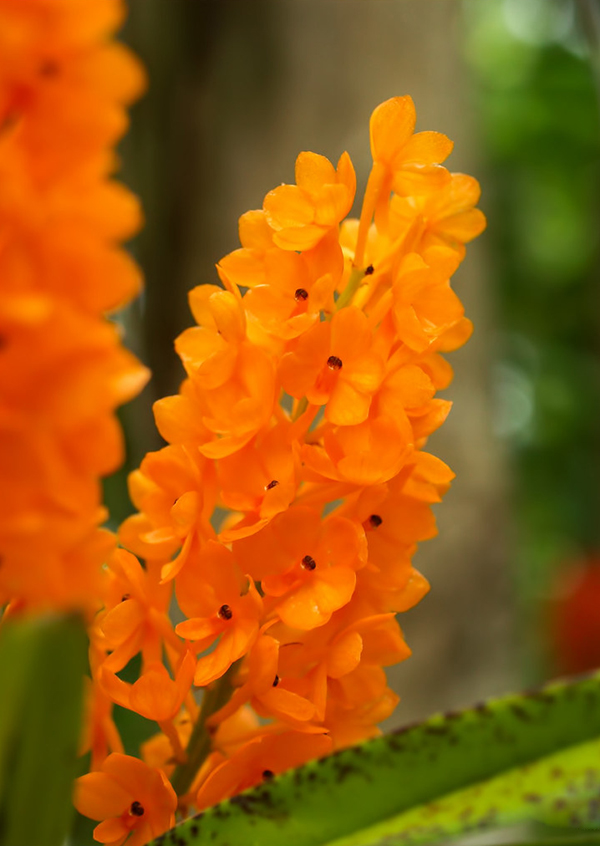 A six inch monopodial plant from Thailand, Ascocentrum curvifolium has a full spray of half-inch, orange-red flowers, and has been used in hybridizing “Miniature Vandas.” 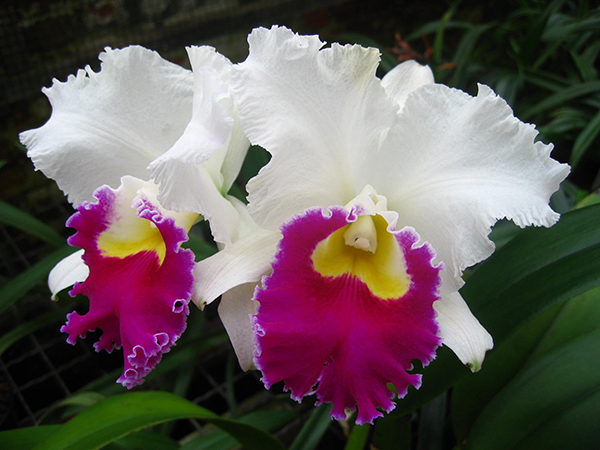 This variety of orchids is the most popular orchid in cultivated collections. Orchidists and breeders artificially cross-pollinating species within a genus or intergenetically, can create the most dazzling hybrids, many of which are developed for the cut flower market. The common name of Paphiopedilum is Lady Slipper Orchid, referring to the unusual cup-like pouch in the flower. These fascinating plants display flowers that have an incredible variety colours and last for 6 weeks or more.

7 INTERESTING FACTS ABOUT ORCHIDS:
1/ The smallest orchid is the size of a dime. This amazing orchid is small enough to fit into a doll’s house!
2/ The vanilla orchid (and its vanilla bean) is the only commercially grown orchid crop (Vanilla planifolia).
3/ Orchids have the tiniest seeds in the world. This makes them a challenge to grow and cultivate. They take forever to sprout
and actually turn into a plant! Growing orchids from seeds is only for the very patient and green-thumbed gardener.
4/ There can be up to 3 million seeds in a single orchid seedpod. You’ll never see them though, they are the size of a speck of
dust and are only visible under a microscope. Part of the reason for their small size is that they lack an endosperm and have no
nutrients within. They require contact with a particular fungus to germinate and grow.
5/ It takes patience to grow an orchid. The plant’s first flowers won’t appear until at least 5 to 7 years after germination.
6/ Some orchid flowers bloom for mere hours, while others last up to half a year.
7/ Orchid plants can live to be up to 100 years old.

Visit the beautiful Queen Sirikit Botanic Garden and its amazing Orchids and Ferns House. Nestled in the Mae Rim area, it is a wonderful place to spend the day amongst the flowers and plants of Thailand. At the top of the hill lies the vast Greenhouse Complex, surrounded by smaller flowers conservatories. The Orchids and Ferns house is not to be missed, as it contains a variety of tropical orchids including large specimens of Grammatophyllum speciosum (tiger orchid), Blue Vanda and Platycerium coronarium. Also displayed are rare orchids such as the endangered terrestrial Goodyera procera, Vanda coerulea and several of the 13 species of Thai Paphiopedillum. In and around the Botanic Garden there are also many activities to do, there is enough to spend the whole day around there! 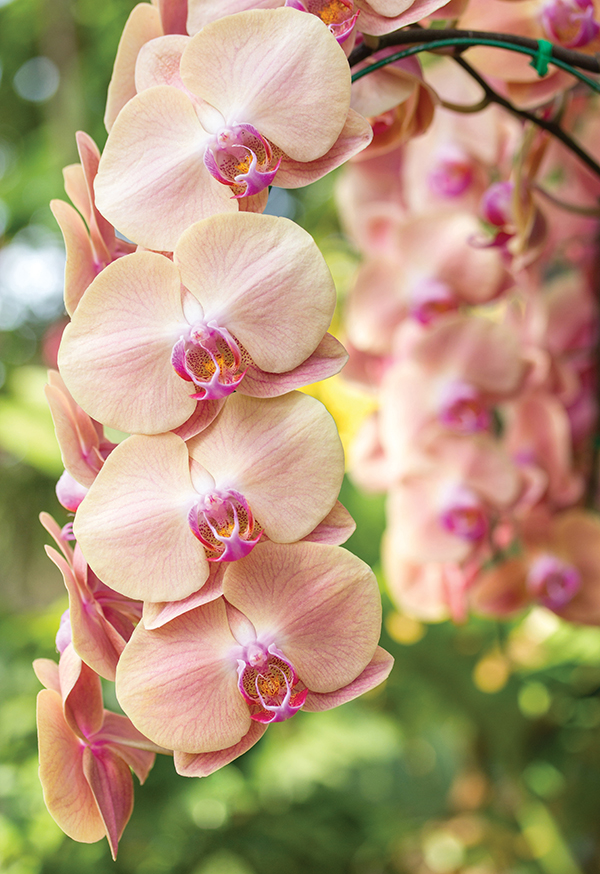 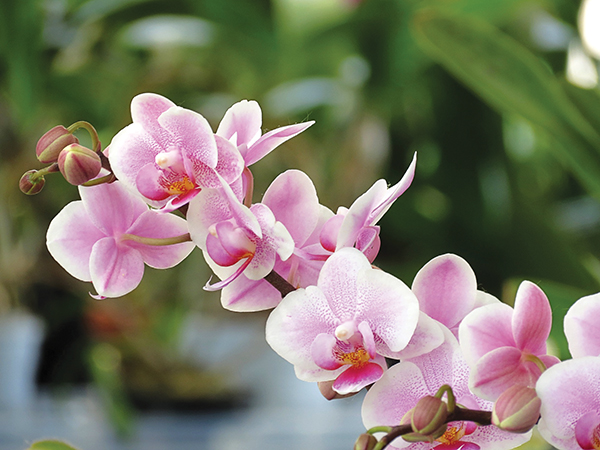 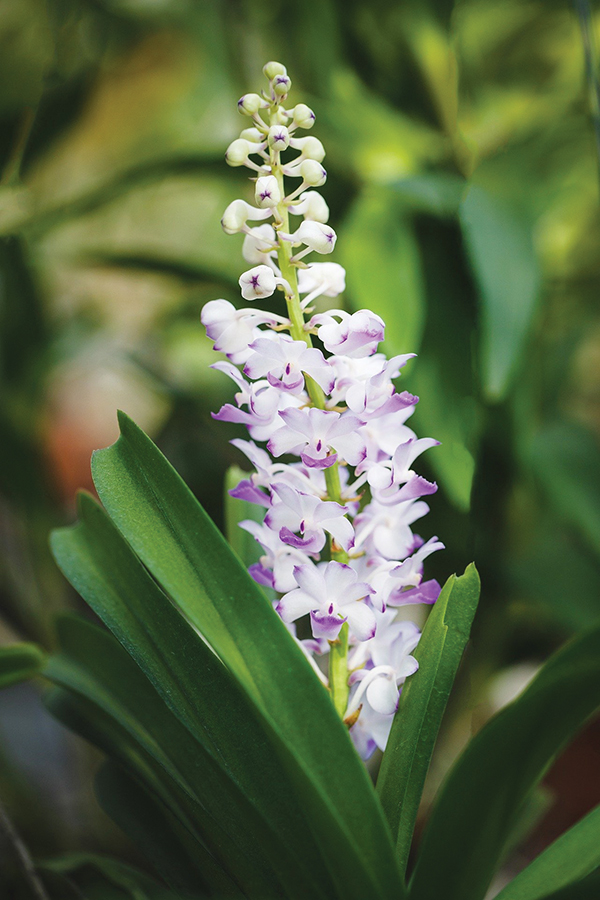 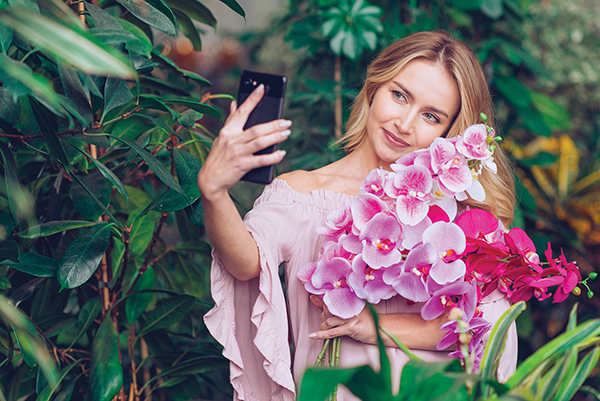 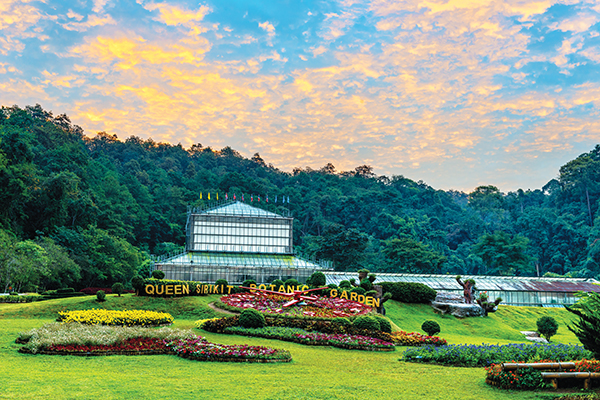