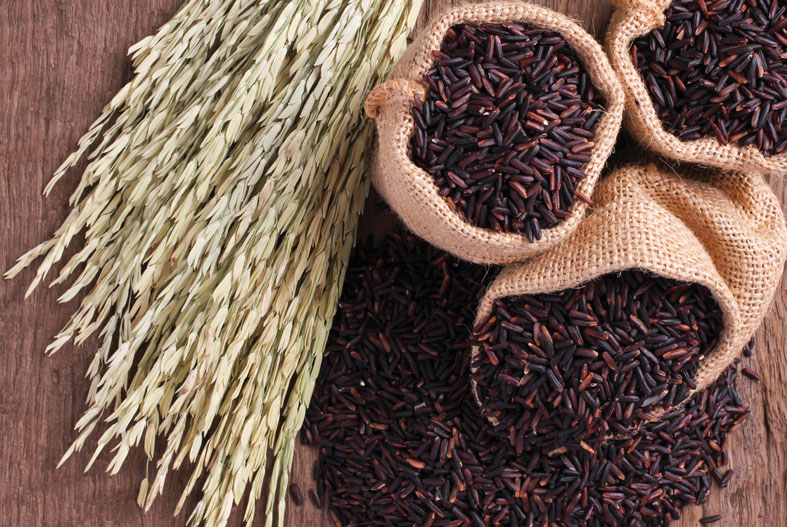 Rice, the grain of culture

For more than half of humanity, rice is life. It is the grain that has shaped the history, culture, diet and economy of billions of people in Asia. For them, life without rice is simply unthinkable.

Riceberry is a newly registered rice variety from Thailand. Originating from a crossbreed of Hom Nin Rice (with wellknown antioxidant properties) and Thai Jasmine rice, it was created by the Rice Science Center at Kasetsart University, Thailand. As a result, it has a long shape (like that of Indica
rice), and is purple and soft.

Riceberry contains three times more iron than other varieties. And not only does it contain a high level of antioxidants such as betacarotene, gamma oryzanol, vitamin E and folic acid (folate), it also becomes soft and is aromatic when cooked. Rapidly Riceberry has become the most popular brown
rice known for health promoting properties including helping prevent diabetes, heart disease, cholesterol, obesity and cancer. It is enriched with both water soluble and lipid soluble antioxidants, such as carotenoid, gamma oryzanol and vitamin E.

Riceberry rice can be grown throughout the year, however, it needs fairly special attention. To grow high-quality riceberry, the rice must be only cultivated in organic farms with fertile soil in a cool climate. The area of production is in the Northern and North-East of Thailand. Rice in Thai culture
Thailand is one of the Asian countries where people chiefly consume rice. The lives of Thai people have been closely bound to khao, or rice since ancient times. In the past, most Thai people, especially those in the rural areas, farmed to earn their living. Thais have an old saying that “in water
there is fish; in the field, there is rice”. This indicates the abundance of foods gained from rice and fish in this land. For Thai people, rice is not only important as the main food that they eat at every meal, but it also has cultural significance. They have several beliefs, customs and ceremonies that show how important rice is to them.

One of these beliefs is that there is a goddess of rice or Mae Phosop who guards the rice plant and helps them flourish. The farmers thus hold ceremonies to worship the Goddess at different stages of rice planting. The worship is believed to encourage Mae Phosop to bless the farmers with a good harvest.

When the rice plants are forming into ears, which they name tang thong (pregnant), the farmers will prepare fruit that pregnant women like to eat, including bananas, tamarinds and sugarcane to put in a bamboo basket together with face powder, perfume oil and a comb and then placed at an auspicious spot in a field. Some blades of rice plants are applied with powder and fragrance and touched with the comb.

This ceremony is done at the moment Mae Phosop and the rice are becoming pregnant. After that a “chaleo”, a multiangular figure made of strips of bamboo, is attached to a stick and planted in the field as a sign indicating that the rice plants are forming ears, and that no one should let cows or buffaloes enter the area for they may tread on the plants 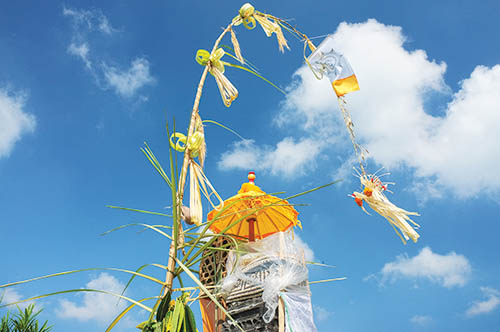 The rice planting season in Thailand usually starts in May. Around this time, showers signal the approaching end of the dry season, and farmers once more prepare for rice planting as one annual cycle ends and another begins. Since Thai farmers have to wait for seasonal rain to plant their annual rice crop, they are sometimes faced with drought problems, so there might not be enough rainfall for crop growing. Farmers solve this problem by digging canals to channel water into their rice fields. At the same time, they perform some rain-making rites and other ceremonies to pray for the fertility of the land.

The rice field mud walls are designed to keep the water in the paddies. By breaking holes in these muds walls, water may be moved down from higher fields to irrigate lower ones. Once the seedlings are planted, they are later transplanted at a greater distance one from the next, almost always through a uniquely
backbreaking operation that is often accompanied by generous shots of rice whisky. The rice then enjoys the rainfall during thegreen season through to September. The rice turns from emerald to a darker green and finally to dry gold under the strong sun. By late November, it is ready to be harvested. Each morning, farmers go into the fields with sickles to harvest their crop. The cut rice is spread on the fields to dry for several days before being bundled into sheaves and taken to the family compound where it is threshed, and may then be milled.

In the old days, water buffaloes played an important role in almost every step of rice planting. Buffaloes and Thai farmers’ lives were closely related in the sense that they lived together. Buffaloes were helpful in various kinds of labour, from ploughing, harrowing, threshing to husking rice before tractors were introduced to farmers in later generations. Rice has always been the staple food of the Thai people, and it plays a crucial role as the essence of Thai life. Farmers transfer the knowledge of rice cultivation from one generation to the next. They enjoy a rich culture with centuries-old traditions linked with rice farming. Rice is the essence of life
Kin Khao Ma Rue Yang? Or would I say “Have you eaten yet?” is one of the common ways for people to greet each other in Thai culture. The reason being that rice has been embedded in eating culture as a symbol of well being, and the value of kinship in society. Therefore, rice is one of the most significant plants in Thailand, as it is the main food that feeds Thai people from one generation to another. Thai’s eat both glutinous and non glutinous rice, prepared as meals, snacks, desserts and drinks (see article pages 30-31).

In Thailand, rice usually appears on the table at every meal. Thai people consider a meal incomplete when there are exquisite Thai dishes on the table but without some nice steamy rice. Decades ago, before electric rice cookers were introduced to Thai society, earthenware pots were used for cooking the rice,
then aluminium pots.

Rice is everywhere in daily life: farmers sleep on rice straw, drink rice liquor and offer rice to Buddha. Rice is also in music, particularly folk songs. Thai classical dances and folk ballads tell stories of rice farming and can still be seen and heard these days. If you happen to go to a kantoke dinner you will have the pleasure of witnessing the traditional dance of the harvest. As long as rice is still the staple of Thai people, it will always have a lasting influence over their way of life and culture. 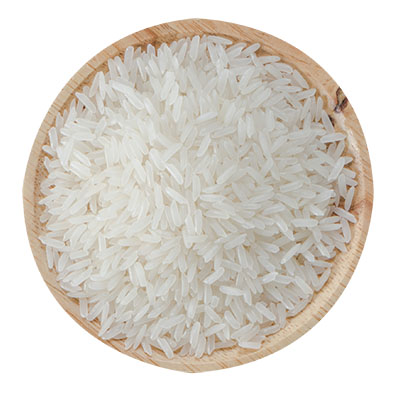 JASMINE WHITE RICE - Hom Mali Rice
This is the most famous rice variety of the country. It is unique for its fragrance and softness. It is also the most exported in the world. Jasmine white rice was found in the province of Chonburi in 1950. A few years later the strain was distributed in various locations in central and eastern regions. But the best soil to cultivate Jasmine rice is in the northeast plains. 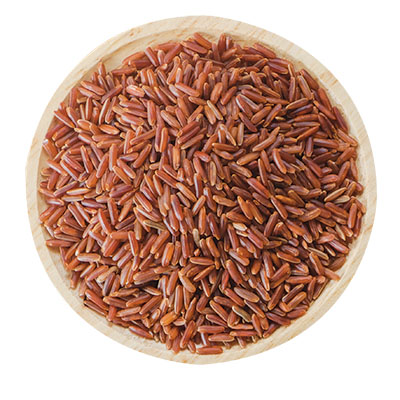 RED RICE - Hom Daeng Rice.
The redness of this rice is caused by mutations of Jasmine rice 105. It gets its rich colour from an antioxidant called anthocyanin, which is also found in deep purple or reddish fruits and vegetables. It is believed to have properties that can reduce inflammation, allergy, prevent risks of cancer and help in weight management. 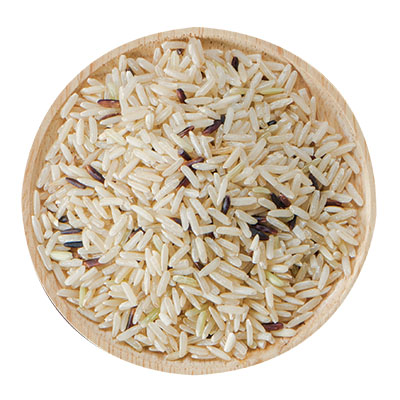 BROWN RICE - Khao Kong
Brown rice has a similar nutritional profile to red rice, including the harvesting process but it is easier to find around the world. Brown rice is a great source of fibre, vitamins B, calcium, zinc and iron, manganese and magnesium. 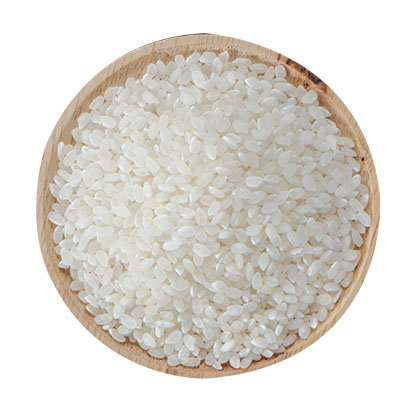 SITCKY RICE - Khao Niow
Sticky rice, also called glutinous rice, is a staple in Southeast Asia cuisine, and can be steamed or boiled for use in recipes. Sticky rice’s texture comes from a single genetic mutation that causes the rice to lack amylose, a type of starch that would otherwise help separate the cooked rice grains. Sticky rice is full of essential minerals and vitamins. RICEBERRY RICE - Khao Riceberry
The grain is dark purple, long and round and when cooked soft and fragrant. It needs special attention, has a good yield when growing organic, and its pigmentation requires cold weather. It is yet another variety with high nutritional value, rich in antioxidants such as beta-carotene, vitamin E, tannin, as well as zinc and folic acid. Its low to moderate glycaemic index means that its starch turns to sugar slowly and thus is suitable for people suffering from diabetes and obesity.