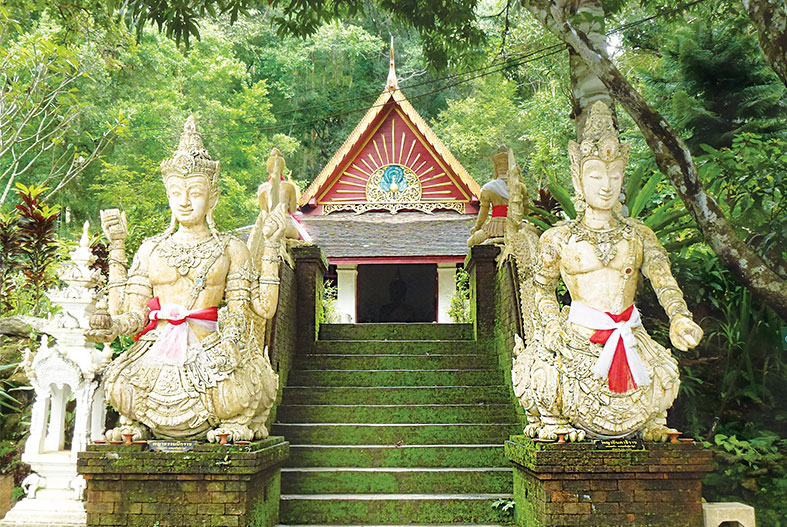 Thai people have a saying : “You haven’t really been to Chiang Mai, if you haven’t visited Doi Suthep temple”. This temple is one of the landmarks of the city. But not many people know of another beautiful temple, a few kilometres before the famous one, that is much less crowded, less opulent, and mostly visited only by locals. Welcome to Pha Lat temple, the secret jungle temple...! 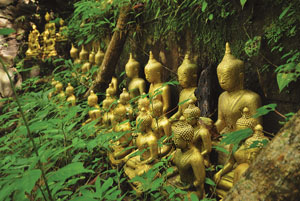 Often called “The monastery of the sloping rocks”, this hidden treasure has it all: an antique viharn (shrine hall), serene atmosphere, breathtaking views over the city of Chiang Mai, plus a little stream that passes through the temple’s garden.
This temple was constructed during the reign of King Kuena (1355-1385). History says that the king’s white elephant stopped and knelt down at this place whilst walking up the mountain. The animal continued his journey but then died when arriving at the top of the height. King Kuena ordered the construction of Doi Suthep temple at the very place the elephant died. Later, he also ordered the construction of temples at the three other spots where the white elephant had rested, one of these being Wat Pha Lat. Those places were considered holy places. 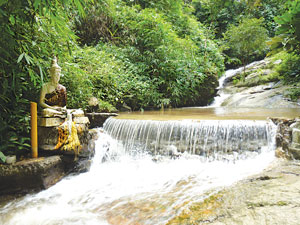 In 1934, a wealthy Burmese wood salesman took it upon himself to start the restoration of Wat Pha Lat. The original temple was almost gone, with only the roof and walls standing. The new temple buildings were built on the opposite side of the waterfall not too far from the road up to Doi Suthep. There is a small bridge crossing the stream. Standing in the middle of the bridge you can see the old temple and the new temple plus, straight ahead, an unforgettable view of Chiang Mai city. Fascinating and contrasting images of the old and the new!
At Wat Pha Lat, the Burmese influence in architecture can be seen especially at the main temple. On one side of the roof there is a drawing of a peacock which is a symbol for Burmese people.The other side shows a drawing of a rabbit, which is the symbol of the birth-year of the monk who was in charge of the temple at that time.
A giant Singh (lions) guards the chedi and the entrance to the temples, representing typical Thai temple architecture. It is very impressive. The temple sits by a small waterfall, nestled into the hillside, surrounded by rocks and beautiful trees. Many Buddha images are stuck into and on to rocks around. At Wat Pha Lat you get a feeling of peace; with the shadow of the trees, the sound of the river and the magnificent view down the stream. It is very relaxing. 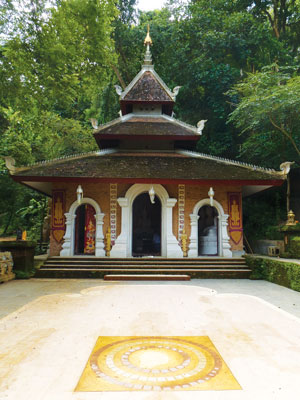 In this temple you will see Buddha images everywhere and images of the white elephant as well. You can also find a path, used by monks to walk to Chiang Mai city. This path continues up to Doi Suthep, about one hour’s walk, following the stream most of the time. It can be dangerous to walk, especially during the rainy season, so don’t give it a try unless you are a good hiker.
Thailand is a country where temples are important to people. They need a place to go to take a step back some times and slow down. Wat Pha Lat is most certainly such a place. Situated in the jungle, off the main road up to Doi Suthep, you will find this little jewel of a meditation spot. Not posh, not full of tourists, no glam and glitter. Walking around the grounds, you will see small posters stuck on the trees, with wisdom quotations like “Everyone maybe a fool, but nobody is a fool forever” or “Greedy eaters dig their graves with their teeth”. Some might make you giggle and others will make you nod your head in approval...