WALLS AND GATES - OF CHIANG MAI 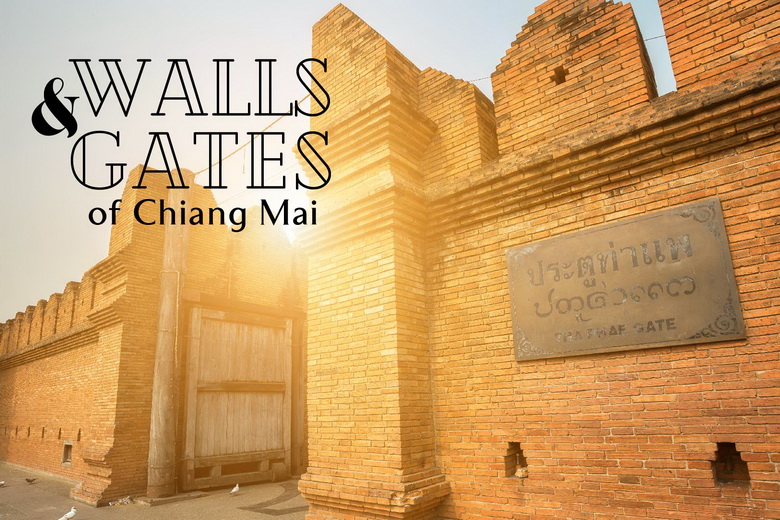 Chiang Mai is often regarded as the northern capital of Thailand. With a beautiful city center and spectacular mountains just outside its core, visitors always fall in love with the calm and relaxing atmosphere. In addition, the city has a unique architecture and historical remains which can be seen while walking in the streets. While many old cities in Thailand once had walls and moats, Chiang Mai is almost the only town where the old walls and gates are still an important part of the city. History is everywhere, waiting to be discover by all...

Once upon a time King Mengrai (1259-1317) established the kingdom of Lanna (kingdom of a million rice fields) in this northern region. He needed to build the capital and so, Wiang Kum Kam town was founded in 1286 on the site of an earlier Mon settlement. However, this town was the Lanna capital for only a short period of ten years, it was then moved due to regular floods.

In 1296, Mengrai invited his two sworn brothers: King Ramkhamhaeng of Sukhothai and King Ngam Muang of Phayao, to visit the new site and consulted them on the suitability of the location and the city plan. Together they observed seven good omens and so King Mengrai decided to establish this place to be the new and more appropriate site for the Lanna capital-Chiang Mai. Wiang Kum Kam remained an important town for many years until the Ping river changed its course and buried it under mud (today this ancient town can be visited).

The new location of Chiang Mai city was finally perfect: with the proximity of the river to trade, the politically control of the area, Suthep mountain to the west to protect the city and enough land around for rice farming. On 12th April 1296, the city was named Nophaburi Sri Nakhorn Ping Chiang Mai. To honor the alliance and work of these three kings, a bronze monument (2.70 meters tall), has been edified in the heart of the city.

Since the begining of its foundation, Chiang Mai city layout was based on ancient military and astrological beliefs. King Mengrai wanted to protect his new city so, he ordered the construction of a perimeter wall and moat; laid in a rectangular shape of 1,800 meters by 2,000 meters. A group of 50,000 men were recruited to construct the royal residence, the Throne Hall, as well as the storehoses and stables for elephants and horses which were used in times of warfare. Another group of 40,000 men were engaged to construct the city walls, observation towers, city gates and city moats as well as the boatsheds. Within four months, most of the work was completed, each of the four walls had one gate with a given name, according to its location or significance in daily life. Nowadays, these walls and gates can still be seen, even though they have been restored and slightly modified.

According to a research by Sarassawadee Ongdakul, under the reign of King Mengrai and his successors, the inner city was the political center where the king and his
family lived. The inner city was also where many Buddhist temples were located such as Wat Phra Singh, Wat Chedi Luang and Wat Chiang Man. The area between the inner and outer city walls on the other hand, was where local artisans and merchants lived, many of who were foreigners. Only Lanna Tai Yuan people were allowed to live in the inner walled area.

Walking around Chiang Mai moat, one can discover the city gates and the ramparts built more than 700 years ago. Each gate had a distinct signification and use:

- Pratu Hua Vieng (now Chang Puak Gate) in the north, was considered the most important gate. It was the gate used by royalty on state occasions. It was later renamed Chang Puak which means the ‘white elephant’, in honor of two servants who saved King Saen Muang Ma’s life.

- Pratu Thapae (Thapae Gate) is on the east wall. This gate was named Thapae because it connected directly to the Ping river where rafts and floating houses were. The word Tha in Thai means ‘harbour’ and Pae means ‘floating house’. The harbour was on the Mae Ping river, near where the Nawarat Bridge stands now. This was the city’s trade center.

- Pratu Suan Dok (Suan Dok Gate) is on the west and means the door to the flower garden, dok being the word for “flower” in Thai language. In the past there was a royal flower garden outside the city walls. Rulers of the Lanna Kingdom would go to visit and relax with their families there. Later, King Geu- Na dedicated a part of this garden to the actual Suan Dok temple.

Later, a fifth gate was constructed, Pratu Suan Ra (Suan Pung Gate) in the southwest wall. First, this gate was ordered by King Saen Muang Ma for his wife, whose palace was outside the city; the queen would use this gate daily while she was supervising the construction of Chedi Luang. Later, the gate’s name was changed to Pratu Suan Pung and used for the execution of rebels. This gate was leading to Haiya cemetery.

- Under the reign of King Tilokraj, a sixth gate was built - Pratu Chang Moi (Chang Moi Gate). This gate was created to shorten the distance from the king’s palace to Ping river and the harbour.

Until the Second World War, these six gates were the only way to come into the city. Gates were always guarded and closed at night. During the day, each of the gates had a market.

As Chiang Mai prospered, villages located near the outer walls, particularly to the south and west, became extensions of the city. Merchants set up businesses along the roads (now Thapae Road and Chang Moi Road) forming the commercial heart of the city. To protect them, an outer system of defence known as the Kamphaeng Din was added some time after the restorations of Chiang Mai walls in 1519. Kamphaeng Din literally means‘land walls’ in Thai language. Parts of these walls can be seen today in the night bazaar area, opposite Mae
Ping Hotel.

Since its construction, the fortification of the city of Chiang Mai has always been unique - technically, physically, and also spiritually. The core concept of the fortification
of Chiang Mai signified the boundary of the Auspicious City (Sri Nakorn), whose fortified area, as well as the five gates, and the central spot, were believed to be blessed and protected by all of the sacred beings-petitioned through the offering ceremonies made by King Mengrai himself. Nowadays, Chiang Mai people traditionally believe that the city’s guardian spirits resided at each gate and corner, and they maintain the city’s prosperity and fertility. Every year a ceremony is held to worship them, you can read this story on page 25.

Like the fences around our homes today, the city walls were constructed to keep the city safe from danger. Though the walls were often destroyed and ruined during wars and invasions, many parts have been restored and are now an essential part of Chiang Mai’s city heritage. While visiting Chiang Mai for its majestic temples, bustling markets and bazaars, breathtaking natural beauty, take time to explore by walking the city’s rich history; you will find some of Thailand’s greatest cultural treasures and bring back home a bounty of memorable experiences. 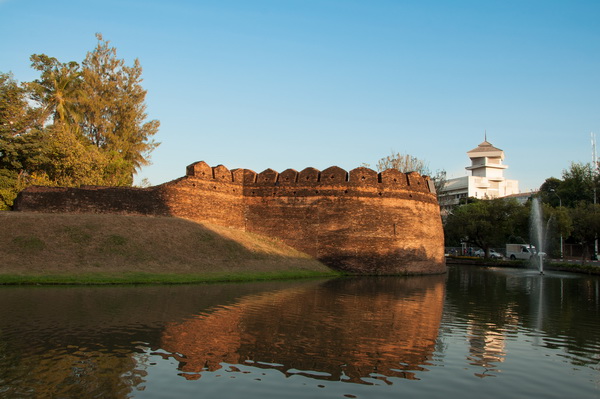 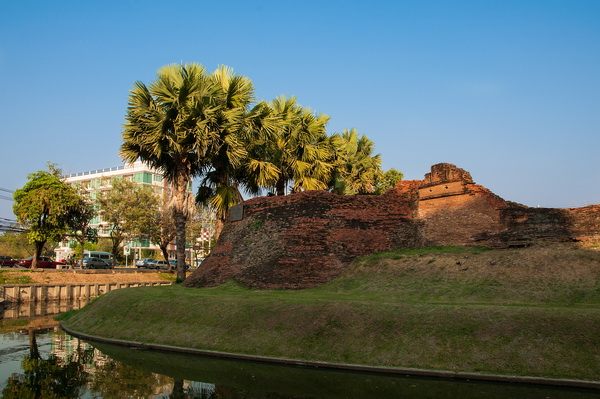 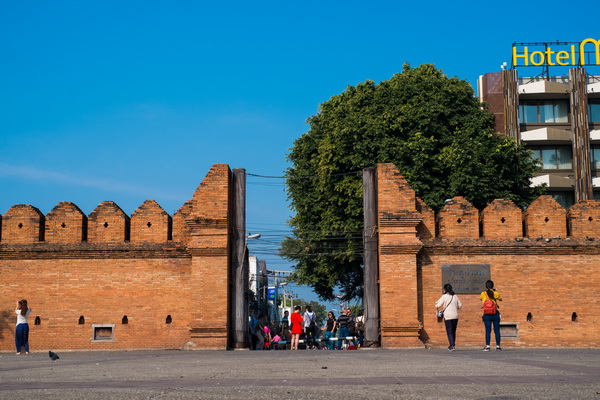 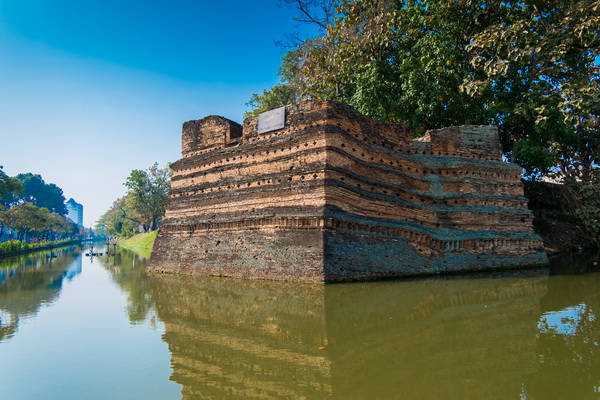 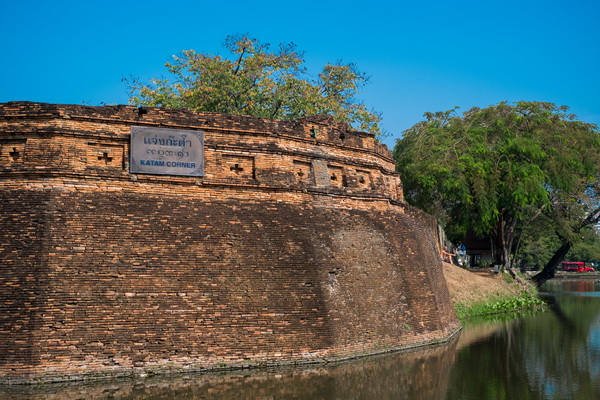 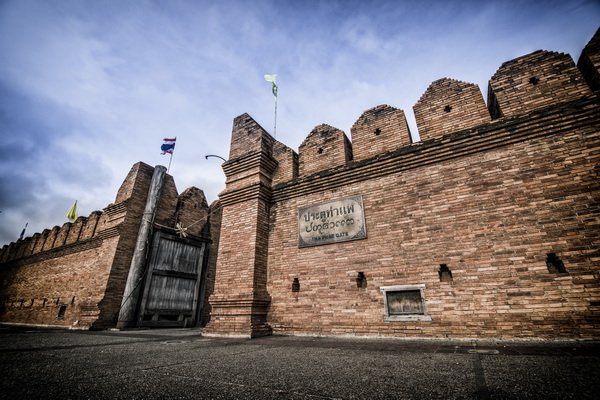 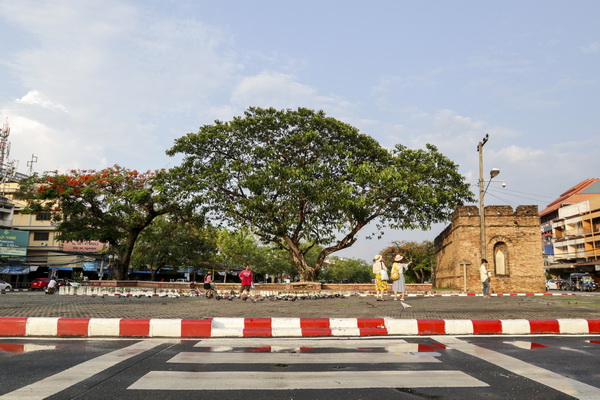 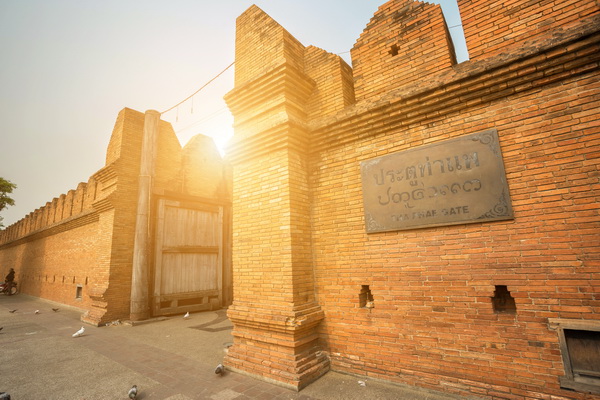