WAT ARUN - The Temple of Dawn 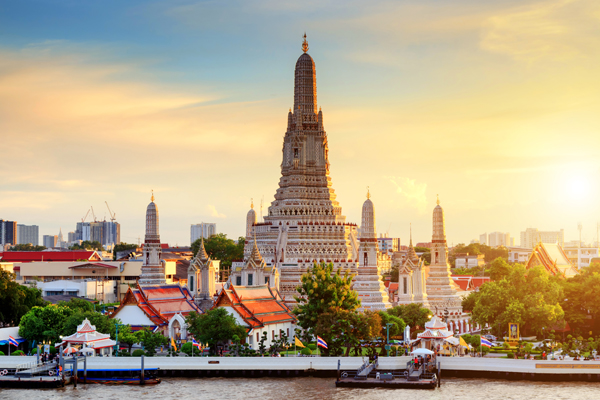 Wat Arun, also known as the temple of Dawn, is a significant landmark of Bangkok, built before 1656. It’s a lot more modest than Wat Phra Kaew and the Grand Palace or Wat Pho and the Giant Reclining Buddha, but in many ways, its iconic shape is better known. Just look at the back of a 10 Baht coin, and you will recognise it instantly. The full name of this temple is Wat Arun Ratchawararam Ratchawora Mahavihara. The first light of the morning reflects off the surface of the temple with pearly iridescence.

After the fall of Ayuthaya, King Taksin ceremoniously clinched control here on the site of a local shrine and established a royal palace and a temple to house the Emerald Buddha. The temple was renamed after Arun – the Indian
god of dawn – and in honour of the literal and symbolic founding of a new Ayuthaya.

It wasn’t until the capital and the Emerald Buddha were moved to Bangkok that Wat Arun received its most prominent characteristic: the 82m-high þrahng (Khmer-style tower). Although the temple had existed since at least the seventeenth
century, its distinctive prang (spires) were built in the early nineteenth century during the reign of King Rama II, and later completed by Rama III.

The architecture of this temple is absolutely unique, Wat Arun’s stupas were built with white bricks and decorated with floral mosaic made from broken, multihued Chinese porcelain, a common temple ornamentation in the early Ratanakosin
period, when Chinese ships calling at the port of Bangkok discarded tonnes of old porcelain as ballast. Today, these stupas, along with the main pagoda, are some of the most famous landmarks in the world and some of the most photographed too.

The main Buddha image at the temple is said to have been designed by Rama II himself, and His Royal ashes are interred in the base of the presiding Buddha image. The murals date from the reign of Rama V (King Chulalongkorn; 1868–1910).

Furthermore, you can see a variety of sculptures around the temple like Kinnarees, Giants, Angels, and Garuda. Another must-attend activity you do not want to miss is to take a photo with two temple guardians: Tossakan, the King of Krung Long Ka, and Sahatsadecha, the King of Pang Tan City. Both demons are very powerful.

Like most visitors you will probably be attracted to the stupas for photo shots, but don’t stop your exploration yet! Walk around the entire grounds, including the surrounding garden and the temples on the side and behind The Temple of Dawn. The ordination hall, with its line of golden sitting Buddhas, is superb, and witnessing chanting monks is a moment to appreciate, reminding you to slow down and take the time to enjoy each minute.

TIP 1: One of the most beautiful ways to access The Temple of Dawn is via the Chao Phraya River. There is a public service boat that functions during day time. Choose the one with the orange flag, it passes approximately every 15 minutes and cost 15 Baht. This boat stops at all main stations, including The Royal Palace, China Town, Flower Market, Icon Siam, Central Pier Sathorn, Asiatique and many more stations.

TIP 2: From Wat Arun, it is possible to cross the river and visit Wat Pho, which is a Buddhist temple complex, located directly south of the Grand Palace. Also known as the temple of the Reclining Buddha, it was the first public University
in Thailand, specializing in religion, science and literature. It is now renowned through the world as the center for traditional massage.

TIP 3: It is best to visit Wat Arun in late afternoon, it allows you to experience the area in the daylight, before heading across the river to find a nice spot to watch the sun set behind the temple. Our advice is to make a reservation at Sala Arun, particularly for a window table. You are in for some unforgettable moments. 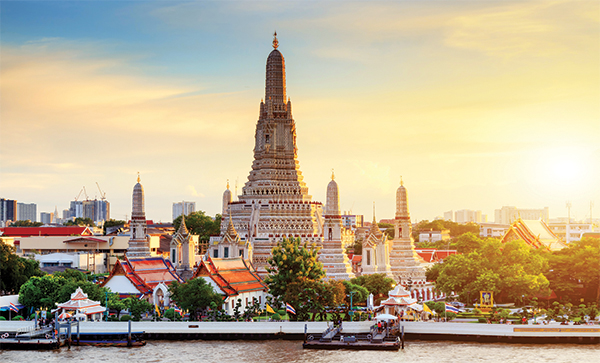 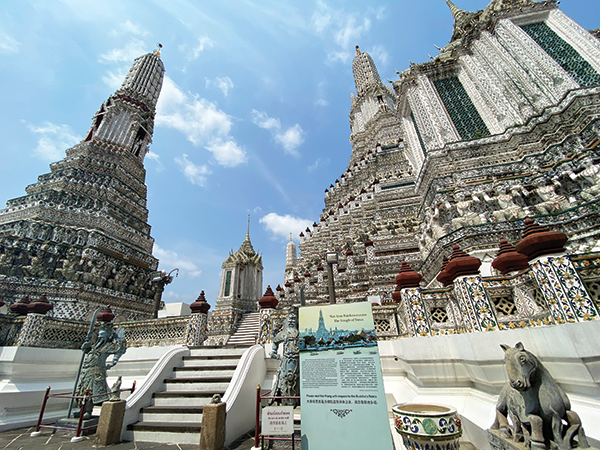 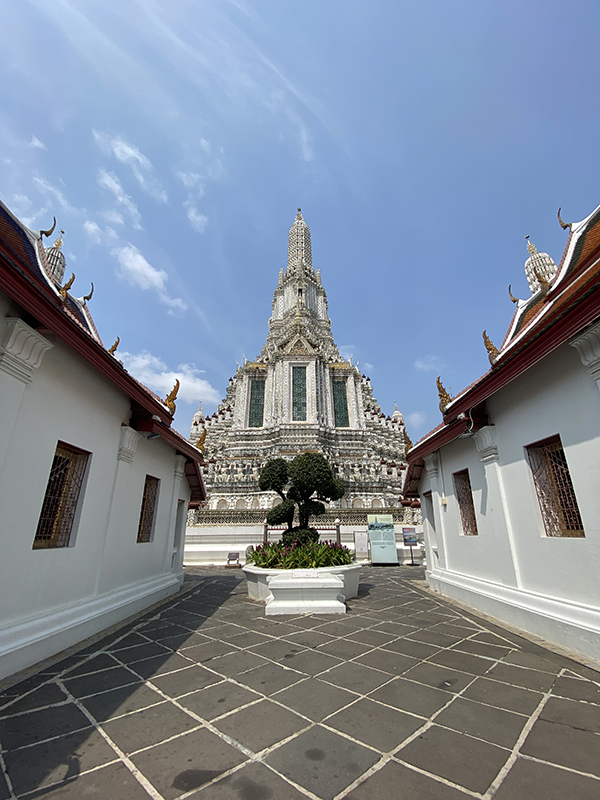 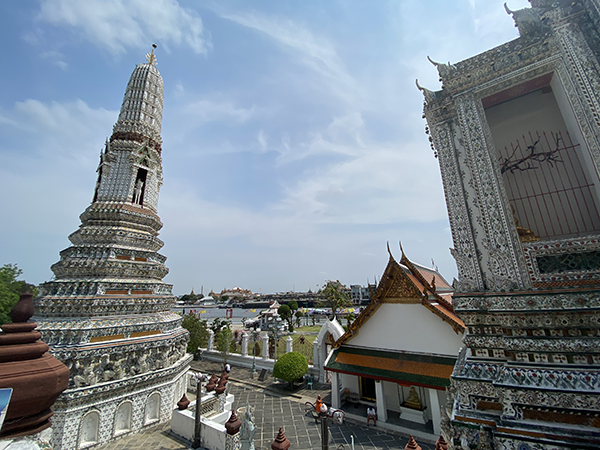 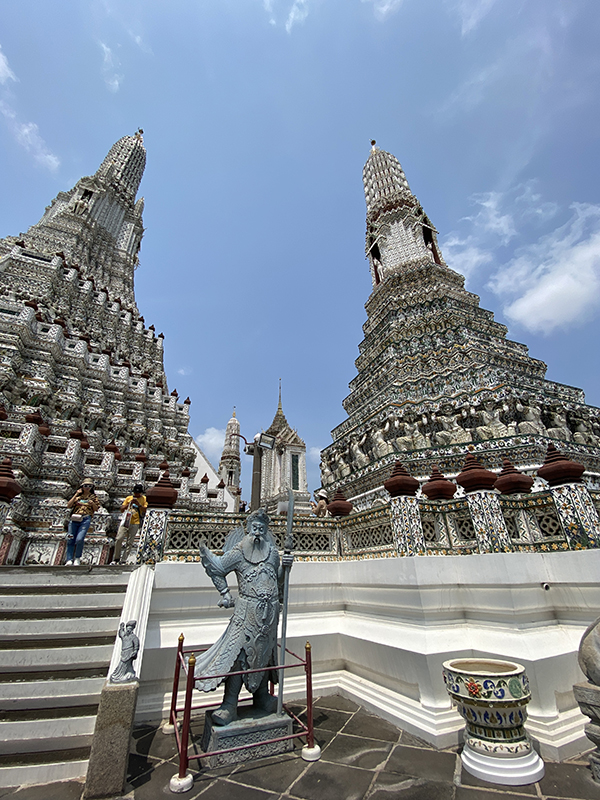 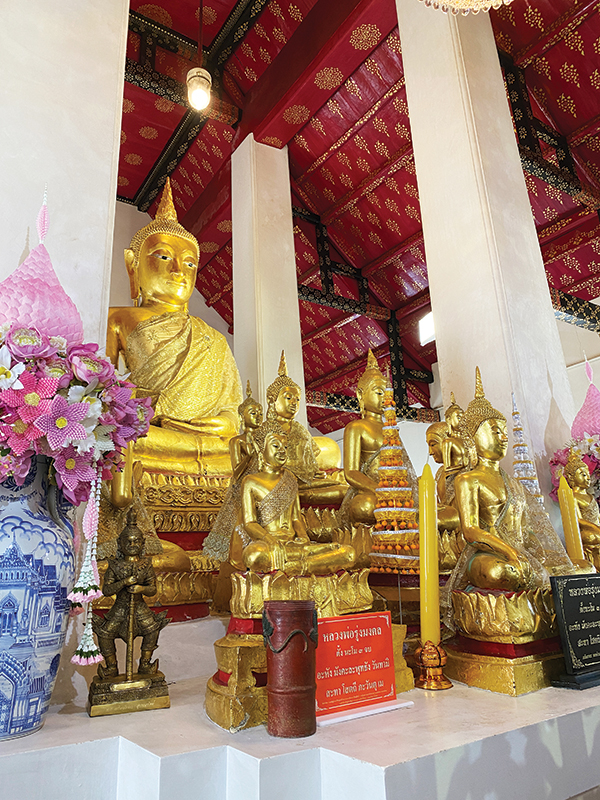 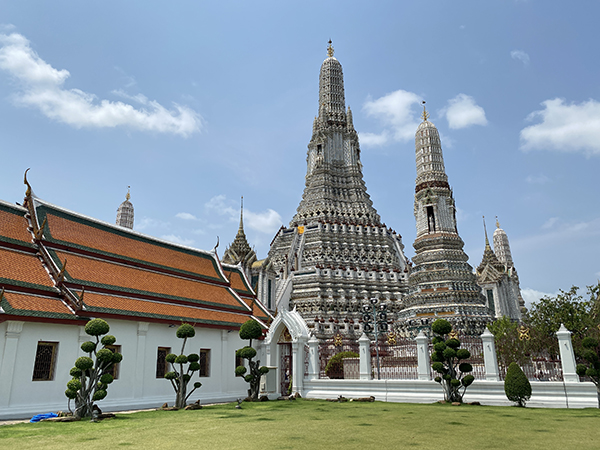 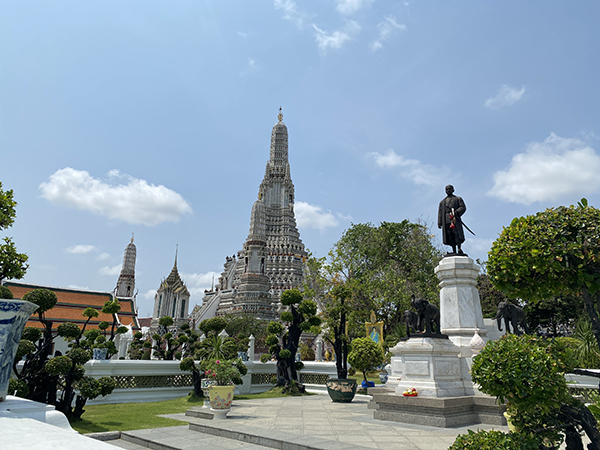 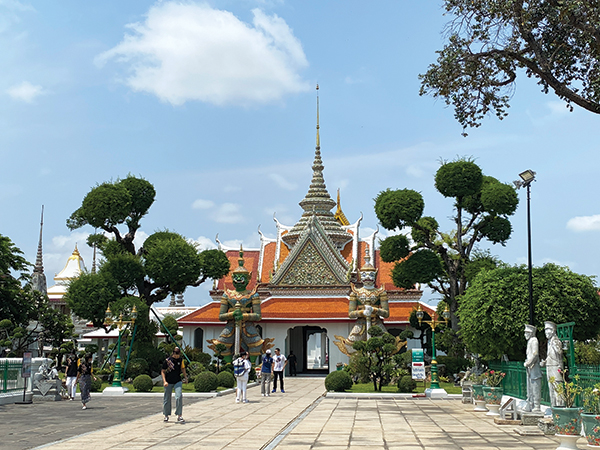 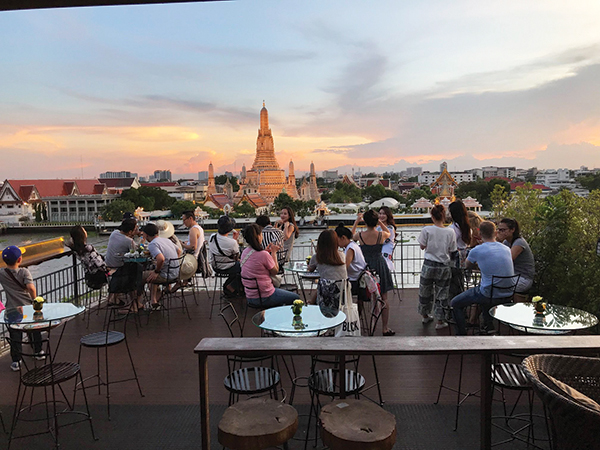