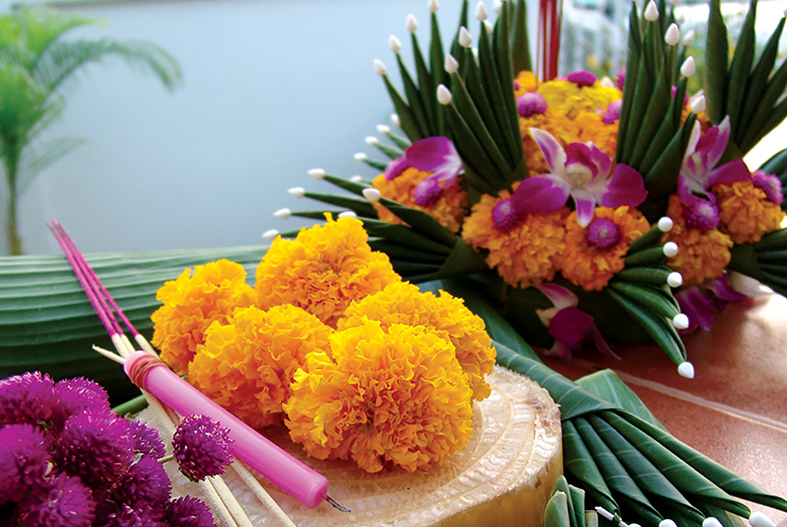 As the full moon lights up the night sky of November, throughout the city of Chiang Mai, hundreds of lanterns and krathongs are lit and released into the sky and rivers.

As the full moon lights up the night sky of November, throughout the city of Chiang Mai, hundreds of lanterns and krathongs are lit and released into the sky and rivers. This is Yee Peng and Loy Krathong time, two famous events in Northern Thailand.

Thailand is currently in a period of national mourning after the passing of the beloved monarch King Bhumibol Adulyadej, Yee Peng and Loy Krathong festivals will keep going but in a sombre manner, to show respect for King Rama IX. This means that everyone can quietly release floating krathongs on the river as well as launching lanterns in the sky, but these lanterns should be of white or grey colors and celebrations should be done in a quiet and respectful way. Fireworks, parades, concerts and beauty contests are all canceled. Loy Krathong festival is part of Thai heritage and represents a close bond between Thai culture and water. This year the event will take place on November 14 to 16, 2016.

As with most celebrations in Thailand, Loy Krathong comes with a rich history. The most common legends revolves around Nang Nopamas, an artistic woman in the royal court of Sukhothai some 700 years ago. Her wisdom and knowledge as well as her creativity all charmed King Ramkhamhaeng. History has it that “Khun Nopamas presented to The King an ornate float made of green leafy deck on which she placed a little cargo of betel-nut, betel leaf, parched rice and sweet-scented flowers. She took several fresh fruits of a fleshy character, such as papaya and pumkin and deftly carved them into representation of fruits, flowers and animals then piled them up in a conical arrangement in the center.”

Khun Nopamas, who could do miracles with her hands, enjoyed making and floating krathongs as an homage to Buddha, this period was decreed a Buddhist holiday on the night of the full moon, with the floating of the krathong a staple of the event.

In Chiang Mai, the celebration of Yee Peng is also famous. This festival features beautifully illuminated lanterns, which are either carried, displayed in houses and temples and launched into the night sky. This year, the tone colors for the hot air balloons and lanterns are black, grey and white.

D.i.Y.
How to make a Krathong
Ready made Krathongs are available in abundance in the markets of Chiang Mai, but cannot beat the pleasure of floating one’s own created hand-made one. Here are a few quick and easy basics to help you start, and then let your creativity run wild to build yourself an amazing Krathong. Give it a hand!

2. The Base:
Start with a slice of banana tree trunk and cover it with some banana leaves cut to shape.

3. The Making:
Take another strip of leaf and fold it into a double triangle. Overlap the lose ends so that it takes on the shape of a scoop then cut the ends straight with the scissors and pin it through the center to the float as well as all around it.

4. The Decoration:
Decorate your Krathong with coloured flowers, incen 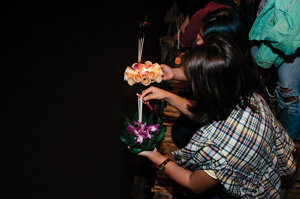 5. The Moment:
Go to the nearest temple located near the river and release your Krathong.